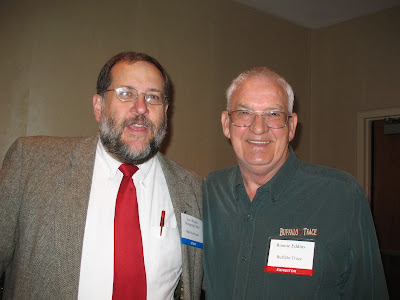 I just learned the long-time Buffalo Trace warehouseman Ronnie Eddins died this afternoon after a fight with cancer. Ronnie was a great guy, quick with a big smile, and always patient. I only got to talk to him at length about bourbon whiskey one time, and I'm still learning from that interview; I'll be thinking about something, and I'll think of something Ronnie said, and things will suddenly fit into place and make sense.

Ronnie was behind a lot of Trace's current Experimental Collection. He'd been at the warehouse over 30 years, and he would follow barrels, and areas in the different warehouses (and Trace has a lot of different warehouse types), and keep track of what worked, what was interesting, and what didn't work. I still remember him telling me that he'd learned that the fog off the nearby Kentucky River had an effect on the barrels in open warehouses.

I remember something else Ronnie told me. "You know, in your life, you only get about two chances to learn from a 15 year old bourbon. There's your first one, and you learn from it all along the time, and you put all that into the second one. By the time the second one's done, you're usually about done too." It was a profound statement about whiskey making, and about a man's life. You don't get many chances to do things right, or to learn something worth passing on. You have to take them, and make the most of them.

Ronnie was inducted into the Bourbon Hall of Fame last month, a well-deserved honor, and the first warehouseman to be inducted; a long-overdue honor. We gave him a Malt Advocate Lifetime Achievement award in 2008, and I'm very glad we did. A mutual friend told me Ronnie was just amazed that people would honor him, or even know who he was. I'll honor him, and I'll never forget him. Go with God, Ronnie Eddins.
Posted by Lew Bryson at 22:54

I love that quote.

Ronnie sold me my first bourbonbarrels. Kind and patient, exhibited when when on two occasions, both late on on fridays, my personal truck and two years later a penske truck refused to move after being loaded. He allowed me to stay on the grounds when it took till after dark to tell it was time to quit working on my truck.

He loved what he did and seemed to tolerate the yankee who came down to whisk away barrels for the still unknown sillyness of aging beer.
Iused to bring him old cheese, he said to me cheese should be half younger than the bourbon you drink. He liked the 6-10 year old chedders .....
see ya later kind sir .. Tom Griffin