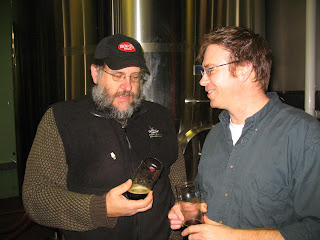 Yup, that's me and Bill Covaleski, in Victory's tank farm, tasting Baltic Thunder...as the tanks were being sucked to the filter. Historic, epic, and delicious.

As Uncle Jack has already reported, Victory invited me and him and Don Russell to taste the Thunder in its last days of wildness. The dates, Dec. 26 or 27, coincided with my annual 'busman's holiday' of beer-hunting with some old friends, so all three of us went. We made a stop at Iron Hill North Wales, where brewer Larry Horwitz made us very welcome with a pre-opening session at the bar, arguing about ... well, about a lot of things, which is why I like hanging out with Larry; keeps your mind supple. Then we grabbed some Christmas leftovers for lunch at my buddy Les's apartment in Plymouth Meeting, and headed for Victory.

Brewpub manager Matt Krueger welcomed us, sat us at a table while he found Bill, and we got a round of Donnybrook Stout. Victory's really got this one in a nice spot, a sub-4% dry stout that drinks easy and fine, interesting but quaffable. We ate a pizza -- stuffing a bit, but when you're headed for the tank farm, laying in a base is always a good idea -- and then Bill showed up. Did we want to drink samples there at the table (surrounded by a loud and happy office party), or off the zwickel? Get serious! Off to the tanks we went.

We tasted four different brews of Thunder. The first, oldest one is, yes, the one I've been touting as extra-lagered, smooth, you'll-never-get-it-like-this-again...and it was tired. It was subdued, no dark fruit, barely any coffee, big, but a yawner. Bill smiled and led us to the August tanks. This was a much more lively beer, with big singing notes of coffee and dark chocolate, fruitiness but not the dark pit fruit I expected: a lighter berry character that my friend Rich Pawlak (food editor for MainLine Magazine) insisted was "blueberry." Okay. This was my favorite of the batches. The two September batches were almost too fresh, a bit sharp, not as well melded: good, but not the glory of the August batches.

Which makes it a good thing that Bill and Ron intend to blend the batches. I remember when blending batches used to be anathema at microbreweries, something those big brewers did. Please. Blending these batches evens things out, rough and smooth. There's a place for unblended batch, and there's just as much a place for blending. We blended four batches, even up, and it was very, very nice: smooth, with all the parts in place: chocolate, coffee, fruit, weight, and the craftily hidden 8+% ABV.

Is it Perkuno's Hammer? No, it isn't. The elusive prune notes that Tom Baker and I wanted to capture aren't there, the slight edge of burnt bitterness isn't there. However, Baltic Thunder has a captivating balance for such a big beer, a dryer edge (probably from Victory's mastery of German malts), and a liveliness that dangerously masks its strength. I've been quoted as describing Baltic porters as a trainwreck between a doppelbock and an imperial stout: Baltic Thunder perhaps leans more towards the doppelbock side. It is most definitely a winner. It is most gratifying to be connected, however tenuously, to this beer...which was never intended to be Perkuno's Hammer, but Victory's Baltic porter.

So I'll see some of you tomorrow at the Baltic Thunder launch at The Drafting Room in Exton. Thunder will also roll at Victory tomorrow, in draft and in 22 oz. bottles. One bright side of the long battles to get this beer out the door was Victory's discovery that their bottling line could indeed handle 22 oz. "dinner bottles." Expect to see more Victory beers in this package.
Posted by Lew Bryson at 01:35

I've never been to a release event like this before, but after all the hype since Sept on this brew, I have successfully seduced (conned) my girlfriend into tomorrow's adventure. How packed is TDR going to be and what kind of time should I prepare myself for?

Is this one going to be around for awhile, or is it more of a one-off, like Troegs Scratch series?

Frank,
We've been told that Baltic Thunder is going to be part of Victory's regular portfolio. The bottled product will be year-round, draft will be seasonal. The distribution area? Not sure. Contact your local Victory supplier and tell 'em you want it!

I'll be at Victory tomorrow for the Baltic Thunder release. It will certainly be worth the drive from Rochester.

Is it my imagination, or are your whiskers looking more glorious than ever? Love the effect!

Your brother of the brush,
Sam

This will be a mess. I too have convinced my wife of the magnitude of said event, and will be explaining as much as I am drinking.

Lunch will be fantastic, because we will make it so.

So how was the event?