I got up Wednesday morning about 7 AM. Showered, dressed, headed downstairs to grab a quick breakfast and get ready for my presentation: "Make Every Beer Count." I caught the people setting up just in time to stop them from putting out glasses: I had tasting mats to designate the beers to be served as A B C. We did that, and poured beers: A and C were Bud Light, B was Coors Light. I wanted to do a "triangle trial" in which people were invited to sample three beers that were actually two beers. The whole idea was to get people out of thinking of beers as brands and get them thinking of beers as categories. This may sound elementary, but to a bar that doesn't get it, it's like hieroglyphics.

I did the presentation, it was well-received (the tasting went well, except for the few people who over-analyzed and decided that I'd actually put out three glasses of the same beer), and I felt pretty good. I went to Steve Beaumont's seminar in the next session; he'd attended my 9:00 session. He had a fresh look at promoting the idea of food and beer pairings that had a lot of folks taking notes, including me.

After we partook of the free conference lunch (What's lunch today, we asked the waitress: "Meat. I'm pretty sure it's meat."), I proposed that we catch a cab over to Miami Beach and visit The Abbey, a kind of contract-brewed brewpub: they have their beers brewed for them at a Florida micro, have done so for years, at three different breweries. Patrick Jones, the brewer at Triumph Old City, used to be the brewer at the Gordon Biersch here in Miami, and told me about The Abbey and their big beers and the hours he used to spend at their small, comfortable bar. He made me promise I'd go, and he made it sound real nice, so we did. 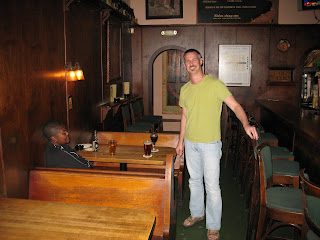 After a harrowing, nonconfidence-inspiring cab ride through rain and over bridges, we arrived at Abbey. It was indeed a small place -- the picture at the left shows about 2/3 of the place, and the rest of it is one table and the keg cooler (short runs on the taps, too). The only other person in the place was the bartender, Aaron, who got us two glasses of their IPA (Maggie had a glass of cabernet that she declined to finish). It was...okay. Drinkable, but some mineraly funk going on.

We decided to switch to the Imperial Stout: good call. This was definitely better, real nice, actually, with real ale fruitiness to it, big body, and some of that burnt bitterness I like in an Impie. I got a glass of "Brother Aaron's Quadrupel" after that, which was quite big, and maybe had a touch too much sour edge to the fruitiness -- but maybe not. I liked it, and happily finished it. Then we had a lighter round: I got a Kostritzer, Steve got a Spaten Ofest. Maggie was happily plugging away at the bottled Strongbow she'd found on the menu, and had demolished two chicken empenadas. 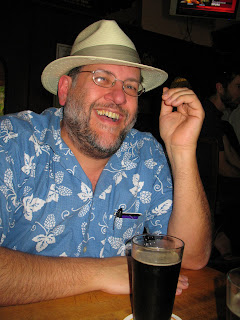 We were enjoying ourselves in a place that Aaron reminded us was emphatically not "Miami Beach." Indeed, not a club atmosphere at all. As he said, if you blacked out the front window, you'd never know you were in Miami Beach, the place felt more like a Chicago or Philly bar. We relaxed, we drank, we rattled on about how rambling beer people tend to be when telling stories -- and interruptive, too: I think all three of us were in the middle of telling a story at one point -- and how that's what people want to hear from us: stories, stray interesting thoughts, that kind of thing.

Eventually we had to go. We walked up to the corner, and after I'd done a really stupid thing at Dunkin Donuts that almost got me a stop-and-search from two Miami-Dade cops, we grabbed a cab and had a much quicker ride back to the hotel. We met back in my room, and then went down to the cocktail party. We drank some delish cocktails, ate more "meat" (okay, it was actually really good tenderloin, chorizo, and crab cakes), and talked some business and pleasure. It was good to finally meet the Cheers staff after writing for them for five years.

After that, Steve and Maggie and I went out to dinner -- we were amazed to get the same scary cab driver we'd had that afternoon -- that led off with some delicious raw Blue Points. More fun, and then we went back to the hotel, end of the day. Great time, overall, fun town, if a bit tough to walk in. Thanks to Cheers for the opportunity.

But you know what? We never did get to any mojito bars. Dammit.
Posted by Lew Bryson at 10:38

You and the Miami-Dade cops -- you're really looking for Crocket & Tubbs, aren't you?

Intresting experiment with the triangle tasting -- was the color (liberally spoken) that close between the two?

So, I have to ask, what happened at the doughnut joint?

A good time had by all, indeed, Mr. B. Just for the record, though, I don't recall suggesting that the Abbey IPA was at the bottom of the keg. I agree with your assessment of it, but I didn't find indications of staleness.

The Full Sail Imperil IPA, on the other hand, well, that was da bomb.

Apologies. I may have misunderstood the turn of phrase you used to indicate the problem. Thanks for the correction. Great time, really good to see the two of you.

Steven, the color on the two beers/three glasses was practically identical, which surprised me; I remembered Coors Light as being a lighter yellow.

Scott -- it's a really long story!

Amy, yeah, but what about the hat?

Lew -- the hat's great too, I've been trying to bring back the fedora for a long time (no, really), even in the Panama style (leaving the Father Mulcahy jokes in the box, if you refrain from Indiana Jones references). :-)

Now the HAT is always my favorite!