One Thing about One Guy 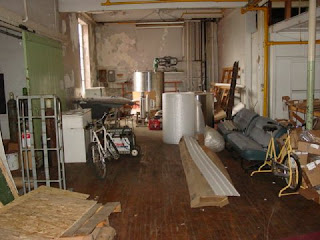 Oh, it's late again. It's been a long day just as I thought it would be (my dad's home and fine, by the way, for those who expressed concern), and I just got done with a very necessary re-write on a sloppy piece I sent in to an editor who deserves much better. I'm heading for bed, and I'll just have to tell you about One Guy tomorrow. But I did want to leave you with this comparison.

The first picture was taken in the summer of 2006, and I posted it on my website as a mystery brewpub. I cut the pipes you see in the back off the wall about two months after this was taken. 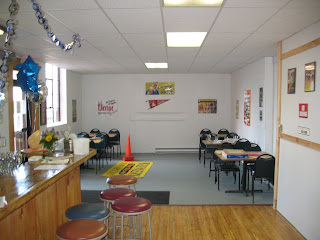 The second picture was taken today. As I said to Guy, jeez, what a difference a drop ceiling makes. I had some delicious beers, and got a great interview (that, unfortunately for the blog, is already sold, so I won't be putting it up here). Best of all, I felt like I was back at the dawn of microbrewing again: simple, plain, personal, enthusiastic...and all about the beer.
Posted by Lew Bryson at 23:52

Email ThisBlogThis!Share to TwitterShare to FacebookShare to Pinterest
Labels: One Guy, openings, Pennsylvania

Glad your father is feeling better.

One Guy looks neat, can't wait to get there myself.

It has to be said ... that place looks like the waiting room of a doctor's surgery... I don't want to be mean, but does that really qualify as a pub exterior?

Oh, absolutely fair, Stonch, no question. Guy repeatedly said he preferred not to call it a brewpub, but rather a brewery with a taproom. It looks like it does because that's literally all he can afford. He intends to make it nicer as he can. He's already had some offers of assistance from talented, interested, happy customers.

I'm with ya, Lew. The concept is perfect, and the space fits the concept. Sure, it's a little sparse, but once you get there, you get it! The mood and atmosphere change dramatically when the place is busy, anyway. Anybody reading this blog needs to carve a little time out and visit what is, to my mind, the best "brewery taproom" I've visited in some time.

I took one look and thought it looked like a sampling room -- and saw the final line in yor post, all that counts, right?

Stonch: As I like to say, it may not be much but it's all mine! (insert smiley face here) My main focus and effort has been the beer--other details such as food (currently American-style hot dogs only) and decor will come later.

It actually came out nicer than I originally envisioned given my budget (and my aversion to debt). If it had to be a workbench for a bar and a keg of beer sitting in a tub of ice, that's what it would have been. Thanks to some hard-working and talented friends, plus some very creative purchasing/borrowing/scrounging, it's considerably better than that.

But no, it currently doesn't measure up to anyone's ideal of a warm, cozy, attractive pub.

If that was my doctor's waiting room, I'd be the happiest patient in the world!

Wow! What a difference!
Hot dogs, Good Beer and a place to sit - works for me! Looks like a very nice taproom that I hope to visit soon.

looks like a basement with hot dogs and great craft brew or home brew to drink. Reminds me of being home. Can't wait to see the place and I wish I had a brewery with taproom open to the public. I think you are doing a great job. Stopping by soon...

Does One Guy have a website? If he does, he doesn't Google well... if he doesn't then he needs one...