I've decided not to do my "Best Of" posting this year, the "Lew Bryson Awards." It was getting a bit forced, especially the "Best of/Worst of" SE PA listings, and I have to admit to being a bit freaked out when Appalachian put my choice of them as best PA brewpub on the side of their building back in 2006...so I'm not doing it this year.

Instead, I'm making the following New Year's Resolutions about beer and whiskey.

1. If there's a hop shortage -- and there is -- screw it: I am going to grab all the super-hoppy beers I want and can get. Hopheads who got all defensive when I talked about hoppy beers being simple? Pile on, I can take it. Just don't get between me and the IPA taps.

2. Work for a week at a bourbon distillery...if one will have me. I want to get hands-on with whiskey, and I'm working out to get in shape for it.

3. I'm going to get more involved with the Pennsylvania Brewer's Guild -- again, if they'll have me -- and learn more about legislation, lobbying, and political action.

4. Re-dedication to the Session Beer Project. You know why: I've wandered from it, and that's bad.

5. More travel -- self-funded when possible -- to the places where classic beer styles are made, to Ireland for a whiskey trip, some days before or after Chicago WhiskyFest to visit breweries in the Midwest.

6. Visit and talk to microdistillers.

7. Question beer authority. More than I have been. Go and see it made, go and taste it there, go to primary sources, stop repeating stuff someone else just made up. Be a historian again.

8. Continue to re-connect to the local and Pennsylvania beer community. I got better last year, I'm going to keep it up.

9. Do better on Beer Blogging Friday. It's fun. 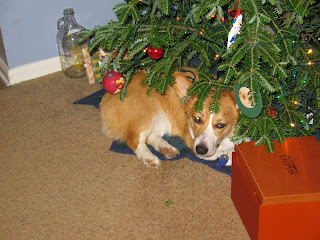 10. Put even more pictures of my dog in the blog. Starting right now. (Note the Triumph growler I'm using to water the tree.)

Join me! Make your own New Year's Resolutions on beer or whiskey -- like try some whiskey! -- and drop them as a comment.
Posted by Lew Bryson at 19:35

You are right. The best advice I ever got from a wine guy in 1986 or so - after I asked whether I should buy Hugh Johnson's wine atlas for fifty bucks or so - was that I should spend the money on good wine instead. So I did both. Expect questions.

i'm going to try to spend as much money on whiskey and scotch as i do on wine. i want to have a "equal" cellar.

My beer-related resolutions are short, and simple:

1. Brew better beer. I have a series of planned improvements to make to the brewery, and I'm committed to brewing at least twice as often, if not three times as often, as I did in 2007. Damn the hop shortage and grain prices. Practice makes perfect, and this ain't piano scales.

2. Work to become a better judge. I took the BJCP exam in 2007, and have judged a few competitions since. One thing I've noticed, from those events as well as all the BJCP judges I know, is that they are very confident in their skills and knowledgeable of their palettes. I need to get there. Self-confidence is not one of my strong suits, but I know my passion for beer will light the way.

3. Drink as many new beers as I can, regardless of what it takes to put them in my hands. I feel I'm already pretty dedicated (obsessed?) to seeking out new brews, but I'm going to redouble my efforts in 2008. Major kudos to places like the Grey Lodge and the Drafting Room, as well as all the great brewpubs in the area, for being uber-facilitators in this quest -- it's one thing to have a great beer list, but another entirely to constantly rotate that list and bring new beers to the region.

"...some days before or after Chicago WhiskyFest to visit breweries in the Midwest."

Keep me updated on this one, I can help you keep the resolution, at least a couple pints worth.

1. Try to get together with the local folks I know online through Beermapping for a pint or two more than once or twice a year.

2. Free up the time and the cash to attend Chicago's WhiskyFest and pester Lew! Um, I mean buy him a round or two at Lunar Brewing.

1.) I will learn to brew drinkable beer and improve my effort every time I brew anew.

2.) I will visit more and new brewpubs, microbreweries and microdistilleries.

4.) I will always be on the lookout for new beers to try.

5.) I will do my best to educate my family and friends about better beer.

Anony: bourbon's still a pretty good deal, but it's headed up.

b-d-r: judging blind will teach you a ton about beer and yourself. Listen to the other judges, but don't be hypnotized or intimidated by them.

Bill: That first one's a GREAT one! (Ah, 'journalistic ethics' prevent me from commenting on the second one...)

bill mc: Good list. Play the last one soft, and you'll have a great year.

you got a bottle of Sam Adams Utopia...lucky bastard!

Heh. Good eye! I actually got it a couple months ago, my daughter badgered me into giving her the box, and she put Christmas presents in it.