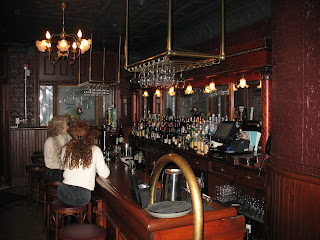 I've been meaning to stop in at Chick's Cafe for a while now, another one of the third wave of beer bars (second wave? fifth wave?) that has been cropping up, like South Philly Tap Room and Royal Tavern. Well... It's not really a beer bar, which is the cool thing: they think they're a wine bar, and what they really are is...a cafe that gets the importance of good drinks. Anyway, when I found out that my old friend Katie Loeb was doing the wine and making cocktails there, I stoked the address into the GPS to be ready for the right time.
The right time came tonight. I got in on-time from Miami, my bag was the 7th one out of the baggage carousel, and I walked right out of the terminal into the open door of my parking shuttle...only to find when I got to the Passat that traffic was backed up on 95 North. I fired up the GPS, and took off across the Platt Bridge, headed for Broad Street. I was parked outside Chick's about 15 minutes later.
Very impressive place. Just a little corner bar, but a classic: pressed tin walls and ceiling, sharp carved backbar, period light fixtures... Oh, the booze? Excellent. Katie was behind the bar and greeted me with open arms. I asked her to make me a Sazerac cocktail -- it's become a yardstick for me -- and it was good, just maybe a bit heavy on the Peychaud bitters -- but did you see that? She had Peychaud, she had Herbsaint. She's working with an exceptional set of spirits, a cocktail artist's set of spirits, including the first bottle of Laird's Apple Brandy I've seen on a bar (she's making cocktails with it, too, and I can only imagine how good they must smell).
It was a cold night, and I was hungry, so I got an app plate of cauliflower gratin, made with fontine, parmesan, and taleggio. Delicious, not watery, not gooey, just the thing.
But the beer... Here's the taps: O'Reilly's Stout, Sprague Hellbender Porter, Stoudt's Old Abominable, Peak Organic Nut Brown, St. Druon French Abbey (some of you old school beer geeks may remember this as Sebourg, it's been re-labeled, but still just as good), 90 Minute IPA, and Peroni. But the bottles are really something: Gale's 2001 Christmas Ale, Samichlaus, Alhambra Negro, La Choulette Framboise, De Dolle Dulle Teve, St. Bernardus 8, Haandbryggeriet Norwegian Wood, La Rullés Cuvée Meilleurs Voeux, Thieriez Extra, and Birrifico Malthus Baluba; they also had a bottle of Spanish cider.
Quite impressive, and I can't tell you how good it is to see a place with a carefully made selection that is not what everyone else has! Fairly reasonable prices, too: my Sazerac was two bucks less than the abomination I had in Louisville last fall. The menu was very interesting, with an interesting structure, and a good selection of cheese plates. I think we're going to have to come down for dinner pretty soon. Can't wait to see what the beer will have evolved to by then.
Posted by Lew Bryson at 20:51

Lairds' apple brandy = Laird's Applejack? My father is a longtime fan, and I've grown to be one as well. I've seen it in bars in the Midwest and in New England, but often got the impression that the bottle had been there for some time.

Same distiller, different product. They have the Applejack at Chick's too, and you'll see it quite often in New Jersey. The Applejack is a blended product, about 40% apple brandy, about 60% grain neutral spirits. The apple brandy is straight apple spirit, and 7 and a half years old, aged in charred oak barrels. It's delicious.

Wow. And they do a 12 yr version as well. Might have to save up for one, or buy a bottle for my dad.