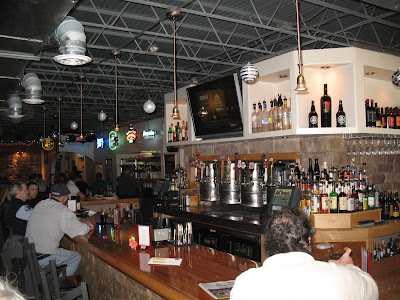 In which we actually go to Ithaca.

We were up in NY over the weekend, visiting the in-laws (mother and 2 brothers), as I mentioned earlier. On the way back, we cruised down along Lake Cayuga, eating up the beautiful lake views, passing up the winery tours, and wondering about real estate prices. We got into Ithaca, and stopped at the Ithaca Ale House, a relatively new place down in the middle of town. Good tap selection, neons, good vibe, looked promising.

And largely, it panned out. The beer selection was strong, and I decided to get a Wachusett Blueberry Ale, since I've had just about every other Wachusett beer but this one, their best-seller. It was quite nice, not overpoweringly fruity, drinkable and pleasant. I also got a taster of Ithaca's Oaked Nut Brown Ale, the one I panned a few days ago, and it was...better. A little sweet, a bit thin, and only the slightest incipienct edge of sourness, maybe resiny wood. It's possible that the problem is that the oak is just a bit too much for the beer to carry: too much wood for the beer.

But we were there for lunch, right? So we ordered: three burgers of varying type and a crabcake salad, and Cathy and Nora split a French onion soup. The soup came, it was good...and then we sat there...and sat there...and sat there. I could have had another beer, we could have skipped reloading the meter...it was annoying, to tell the truth. Don't know if it was the kitchen, either, because the waitress avoided us, and the other tables were dragging. The food, however, when it did finally arrive, was excellent. My burger was delicious, fresh, done just rare, the way I like it, with crisp lettuce and onions. Worth the wait? Tough call; I really would have liked another beer.

After your recent post about being ignored at Victory perhaps I am sensing a trend. You know, piss off the beer writer. To all a Happy New Year and be safe.