Philly Beer Week's last event for me happened two days ago on Saturday; the Return of the Kegs. I took the kegs from our Upstate Beer Night at the Grey Lodge back to the brewers. It was a long day.

I filled up the Passat, and dropped Thomas off at Holy Ghost for the qualifying rounds for the National Catholic Forensics League championship (he qualified, and will be competing in Albany in May!). That was about 7:50 AM, and I aimed it north from there, up the Turnpike Extension. First stop was One Guy Brewing, and although I mostly just had time to drop off the keg (Atomic Punk IPA, and it went over well) and hit the head, I did get a short progress report. Guy's still having to run hard to meet demand, and an expansion of the taproom (almost doubling in size) is about to start. He's getting Friday nights when people can't get in the door! Bravo, Berwick.

Off again, headed for Williamsport. It was a beautiful day, cold and mostly sunny, and not too much traffic on the road...except for one wing-ding on Rt. 15 North, who just would not let me pass him. I don't get that. If someone wants to pass you, why not just pull over and let them by? Why play games and whip back and forth across two lanes to keep them from passing? Are you bored? 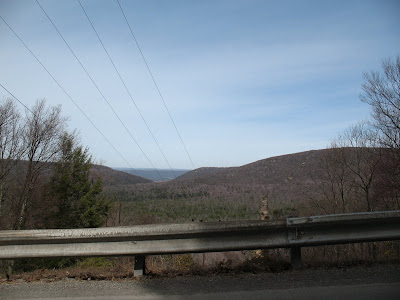 Anyway...slid into one of the courthouse parking spots, grabbed the Bullfrog keg (Beesting Saison, might have been the hit of the night) and handed it to a waitress (the pub wasn't open yet, it was a bit before 11). Ran back to the car and drove three blocks to Bavarian Barbarian. Mike was in, and I gave him his dunkelweizen keg back (not enough dunkelweizens out there, and I hope he keeps making this one). Took a few minutes to sample his spiced winter ale, First Snow (good -- for spiced ale, I'm not a huge fan, but this had all the right pieces in the right places and didn't overwhelm in any direction), then hit the road again. 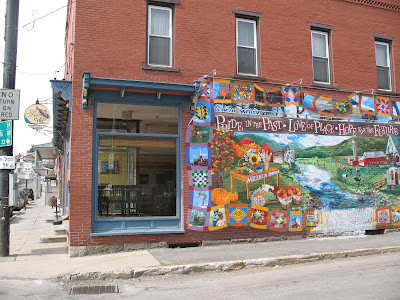 Now I headed down Rt. 220, then cut back east and south, over two ridges (that's the landscape picture above) to Millheim and Elk Creek Cafe and Aleworks, to return the last keg (strong Belgian golden, and that was nice in a small glass). I had pushed hard all morning so I could relax now: I'd never had the food at Elk Creek, and I wanted to try it. Worth the wait. I had a glass of Oatmeal Stout -- smooth, bitter, nice -- with a bowl of lamb-lentil stew, and then a Blue Heron Pale Ale -- bright and hoppy, very drinkable -- with a smoked turkey, bacon, and avocado sandwich on flatbread, which was delicious; the side of house-made potato chips were outstanding. Gotta go back for more.

Down the valley to pick up Rt. 322 down to the Susquehanna, when I realized I had about 30 minutes to kill before talking to the Harrisburg homebrew club (ReHAB) at Scotzin Brothers homebrew shop in Lemoyne. It was a Saturday afternooon; I stopped by Tröegs. Wow. First time I've been in since the remodeling of the tasting area. What a huge difference. If you haven't been, you should go, it's a great place to try the latest and greatest from the Trogners. Just don't do like I did and park in the wet spot in the parking lot; turned out to be run-off from spent grain, and my car and I both smelled horrible! 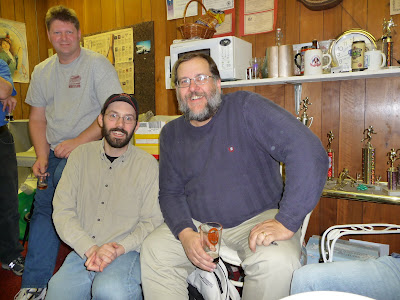 Across the river to Lemoyne, where I spent a very pleasant two hours talking beer (and whiskey) with the homebrewers, and sampled some pretty darned good homebrews. They did not make a mead-drinker out of me -- sorry, guys, others have tried, and it just ain't happening (with one exception in Oklahoma and I've never tasted the equal since) -- but there were a couple beers that were excellent.

I left there about 5:30, stopped in at my parents' on the way home for dinner, then finally -- 450 miles later -- returned home. That's when I found out that my daughter, Nora, had learned that her school robotics team, the Mount St. Joseph Academy Firebirds (Nora's a freshman member), had won the Chairman's Award at the Philadelphia Regional FIRST competition, an awesome and jaw-dropping honor indeed. We were pretty proud parents. Good day!
Posted by Lew Bryson at 07:41

I know those guys from ReHAB...I was one until I had kids. If I knew you were stopping by, I probably would have made the trip up to hear you talk.

Sorry, I should have put something up on the blog. March has just been crazy, as you might be able to tell from the spotty postings!

I'm with you on the mead thing. The only exception I've found was the Atomic Fireball Mead that was featured at last year's AHA conference. I could drink that often.

That musta been a heckuva mead you had in Oklahoma!? For a homebrewer, that guy must be pretty good, and probably a good cook, too?!

Cheers, Bob! Wish every meadmaker made it like you do.

There is a new brewpub in Windham, NY that you need to check out. Its amazing what they can do with their tiny kitchen and the beer is mighty tasty as well. Also, the Dutch Ale House in Saugerties is putting in a brewing operation as well. Sounds like research for the NY Breweries book to me.

I met you at the ReHAB meeting. Thanks for the writing advice. By the way, I do have a few bottles of a very good mead left. It might change your life.

Thanks for coming to the ReHAB meeting Lew, everyone had a great time, you are an amazing encyclopedia of alcohol related knowledge.