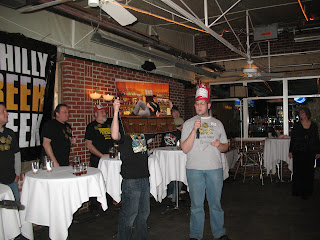 Well, it dragged at times. Some of the contestants were very young (how can you be a "Philly Beer Geek" and not know what Red Bell is?), some were shy, some brought props (Steve Hawk's poster-sized photo of himself reclining vampishly on a bar, shown above, brought the house down), and a couple clearly didn't really know that much about beer, but got through on sheer stones and quick wits. High points of the night: Hawk's clear -- weird -- passion in answering a one-word beer geek question; Doug Hager (soon ("May. Probably.") to open Brauhaus Schmitz on South Street) mentioning in the answer to a different question that he used to sing a "beer version" of Pink Floyd's "Wish You Were Here," and singing it when we asked; and one real honest contestant -- sorry, can't remember who -- saying that we didn't want to pick him "as the face of Philly Beer Geek, you want her," pointing at fellow contestant Gina Talley.

In the end, we picked five, and forced Doug Hager and Mike Hore into a sudden-death playoff for the final spot. Which was fun. So was the Krook's Mill Pale Ale they supplied to the judges: nice, nice stuff, Chris! Great time talking beer with folks, good hanging out with my fellow judges, and thanks to Jason Harris and Carolyn Smagalski for putting the whole thing together. The Finals are next Thursday at Manayunk: I guarantee some fun.
Posted by Lew Bryson at 09:50

I'd nominate Christian Schmidt. Talk about a geek that guy didnt know when to get out of the business he loved it so much, hanging aroudn until the mid 80's and all those beers he put out-- "tiger head ale" "bock" "classic" "kodiak cream ale" whew.

as a resident Yunzer I have to give big ups to the Philadephia beer scene/culture, they are getting it done for sure and setting an example for the rest of the state/nation to follow. I also need to acknowledge the great beer scene in Central PA , Lancaster and Harrisburg are definitely getting it done as well. Hopefully Pittsburgh can follow through.