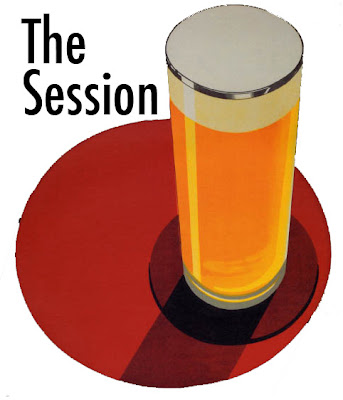 It's The Session, beer blogging on a common topic, and this month John Duffy of The Beer Nut asks: "I want to know what's so great about [plain, yellow, fizzy lagers] and what's awful. Are we talking just lawnmowers, barbecues and sun holidays here, or is there a time for some thoughtful considered sipping of a cold fizzy lager?" See it all here, shortly.

There are going to be a lot of folks reminiscing about when they drank fizzy lager this month, I'm guessing. I put plenty of them down my steaming craw back in the day, God knows (and some of them came back up). There's going to be people "giving them a fair chance" and deciding that yeah, they really do suck. There's probably even going to be some "screw you, I'm not drinking those." As I said: I'm guessing.

I'm not going to do that, even though I'd planned to. My first beer, icy Rolling Rocks with the band, all that jazz. But screw it. Philly Beer Week calls, and I've got to get ready and get down to it. So I'm just going to pre-game a little with a tallboy (that's a pint can, for you Euro-styles) of Narragansett.

Is that good? Pre-gaming isn't, really, but on the other hand, it's been a long, crazy day, frantic e-mail as I get caught up going into the weekend full-tilt, like street-luging down Negley Ave. in Pittsburgh...and I could use a beer, just to slow down a little. Grainy, a little sticky, fizzy (and that's where most of the bitterness comes from, the fizz), and...not much else, really.

Is that bad? Well...I guess, if I was looking for much more. But you know, I drink soft drinks, too, I like to drink, and if I drank beer everytime I drank, I'd be like people describe Winston Churchill, in a constant state of varyingly mild inebriation. So this fits in that. I'm in the moment. I'm not thinking about it, normally, though I am now, of course. But mostly I'm thinking about the music that's playing (Nick Lowe, I Love the Sound of Breaking Glass), the upcoming evening (train ride, opening tap of Philly Beer Week, seeing friends and brewers, maybe hanging around and hitting one other event), my son coming home, the dogs nosing around (bright-eyed little beauties)...life.

I can do that with a glass of Sierra Nevada Torpedo. But it demands more attention. This...I was going to say is mindless drinking, but that's not really right. It's effortless drinking.

Is that bad? I don't know. But I don't really care, either. This is beer for other times. Beer for old friends. It's social. Should I be upset when my friends offer me fizzy lager? I'm not, except for a fairly short period in the early 1990s. I got over that. I draw the line at light beer, but that's okay with almost any mainstream drinker; that doesn't challenge them. Beer isn't about beating people up, any more than food is. At least, not for me.

Well, I'm done. Been nice sitting with you, but I've got to go. It's been nice. We should do this again sometime.

I'm hosting The Session myself next month: Smoke 'Em If You Got 'Em. Rauch it up. Be there.
Posted by Lew Bryson at 15:12

How can it possibly be bad?? The thoughts, the images you're conjuring up while drinking this fizzy yellow lager, are glorious, just like if you were drinking any other good (great?) beer! If it was a bad beer, could those same thoughts be as positive?

I just came from a random tasting of three Voodoo beers; Pilzilla, Wynonna's Big Brown, and 4 Seasons IPA (2 were great, 1 not so). Those were followed by the firkin from Otto's tonight, their Mt. Nittany Pale Ale, a stunner. Right now, it's a Stegmaier Gold Medal, one of the best mainstream regional beers in the U.S., and they're all equally as good as the last.

Perspective, my man, perspective! I think we owe a lot to those little regionals that kept weird styles alive (PA porters, hybrid ales, seasonal bocks) when there was NOTHING else out there (think 70s).

We owe them a debt of gratitude, not our scorn. But then again, if you're talking Coors Light....I understand.

"I Love the Sound of Breaking Glass"

I knew I liked you.

Great post, the whole drinking without thinking pretty much sums lager up perfectly!

A rauchbier session would be just up my street (assuming I get my hands on some in the next week or so).