Ithaca is Gorges -- Part I 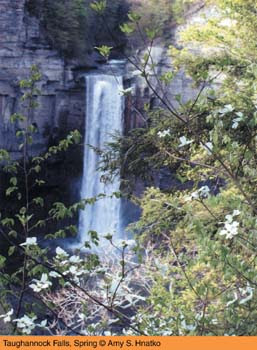 I got an odd box from the city of Ithaca not long ago. Actually, it came from the city's visitors bureau, Ithaca Beer, and the I-town record label, an interesting trio of actors all urging me to consider Ithaca as a destination for beer, music, and other attractions (like Taughannock Falls, at right, one of several nearby waterfalls). They craftily caught my attention by wrapping the whole presentation around a CD of I-town artists, a small fly-drive of artwork and press releases, and a 12-pack of Ithaca beers -- those sly dogs. So after chilling, I popped the sampler CD in my PC (you can listen along here, I liked the Billy Cote cut) and popped open a bottle of Gorges Smoked Porter.

The CD? Good tunes, if a bit heavy on reggae for my tastes (do small labels get reggae artists for the same reason small breweries do ales: it's easier and cheaper?). The Smoked Porter, on the other hand, was very much to my tastes. Porter, no matter what else it is, should be drinkable, downright quaffable. If it isn't, I think it misses the whole point of being porter. Gorges doesn't let the smoke get in your eyes and overwhelm the porter, it's not gaggingly bitter, and it's not woozily strong. Mostly it tasted "moreish," as the sainted MJ used to say.

More to come shortly, on the beers, the music, and the travel to Ithaca concept.
Posted by Lew Bryson at 13:17

You should so go to Ithaca, you won't regret it...well maybe this time of year you would...but in the late spring and summer it is truely Gorges

I forwarded this one to Jeff just now. I joked that it is pretty rare to see a craft brewery "in cahoots with the local city government."