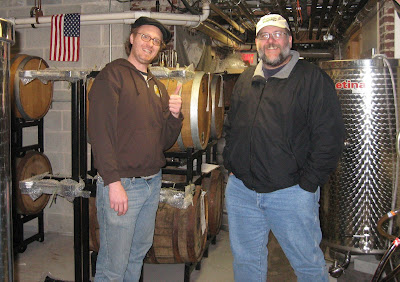 Scoats and I did the Upstate Beer Run on Wednesday, gathering up the final beers for the Upstate PA Beer tasting we're doing at the Grey Lodge Sunday night. Scoats came out to my place early Wednesday morning, and while I was finishing my Cheerios and strawberries, Cathy made him a quick bowl of oatmeal. Sustaining. We set out, Passat rolling (I'd get 39 MPG on the day, too), and telling each other tales.

First stop was to be the Bullfrog Brewery, but we were ahead of schedule, so we went up over the mountain to see One Guy. Guy pulled in just after we did, and we met the Two Other Guys (he's hired assistants) as we went in. We sampled the hefe -- nice, tart -- the Berwick Lager -- clean, smooth -- and the IPL, a batch of Atomic Punk IPA Guy made with lager yeast. "I could sell this," Scoats said, and he's definitely right: good stuff, clean, hoppy, like Prima Pils with more body. We toured the huge place (huge place, tiny brewery), saw the pizza oven (waiting on time and money), the beer garden (waiting on time and money), and the bottling area (waiting on...).

We got out, and now, of course, we're late (sorry, Terry), and get to Bullfrog about 11:20. No problem, Terry says, and takes us downstairs to see the operation (That first picture is Terry and me down in the midst of things). Wow. Lots of barrels, "kegs gone wild," bottling tanks just for the wild ales... Terry's found a big niche market for soured beers in Williamsport; who knew? He gave us a sample of his latest: a beer brewed with wild yeasts and 100% cacao chocolate. An amazingly layered beer that punches funk and chocolate in ways that are quite appealing. We put away 2/3 of a pint in short order. Once we grabbed a sixtel of Beesting Saison, away we went.

Not far, though. We just went over a few blocks to Kimball's Pub, a place that wasn't much to look at (clean, but real plain), but had a damned nice selection of beer. We were picking up another sixtel: Bavarian Barbarian Square Feet Wheat dunkeweizen. Mike Hiller had dropped it off there for us; he was in DC on Wednesday, showing off his First Snow winter warmer at the Brickskeller. Not bad for your first year! 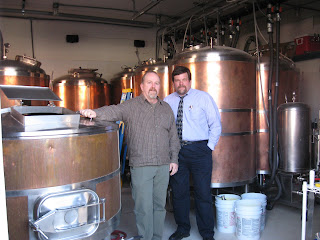 Off we went, down Rt. 220, then over the ridges to Millheim, where we spent some very pleasant time with Tim Bowser and the crew at Elk Creek Cafe (my man Sam Komlenic was there, too; always a pleasure, Sam: that's Tim and Sam with Elk Creek's brewhouse to the right), sampling and shooting the breeze. Elk Creek's a beautiful place and no doubt; if you haven't been, go. A sixtel of Belgian strong, and we were on our way (after a quick stop at Penns Valley Meat Market for some house-made ring bologna and jerky). 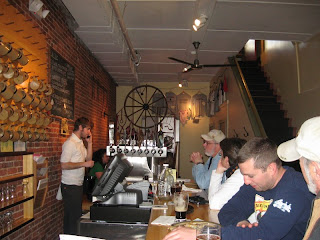 One more stop: Old Forge Brewing, in Danville. Wanted to get here for months now, and I have: worth the trip. Great, simple place, well-populated even at 4 on a Wednesday afternoon. I got the alt, and it was good: proper hop bite, not over-alcohol'd, not too much hop aroma; maybe a bit dark, maybe a bit sweet, but Damien said he was aware of that and on top of it, this was the first batch. I did get a glass of Sensessionale, and it was excellent session stuff, a definite all-day sucker. 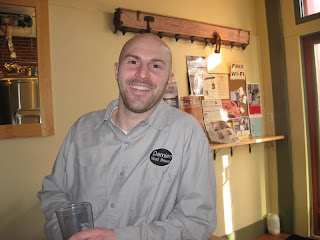 What really put us both away, though, was the food. I'd been told the menu was simple but well-executed, and man, was that true. Best $6 quesadilla I've ever had, perfectly done, cheesey, chicken, thin-sliced apple, just great. And the soft pretzels are very German, big, soft, chewy-tasty (and made the WaWa 'soft pretzel' I had on the way to Philly Beer Geek last night taste like a hard sponge); made at a Mifflinburg bakery. Great eats.

And then we drove home. Good day, good beer.

A big thanks to Scoats for the pix: I forgot my camera!
Posted by Lew Bryson at 10:27

I hope to make this event on Sunday. It sounds like there is a lot to offer.

My brother and I love Guy's beers..... My brother was a Miller Lite loyalist until a few months ago when I introduced him to Guy's hefe and his Berwick lager, he is now a full fledged convert.... It's less than 30 minutes for us so we enjoy stopping down, and all the beers are very tasty and drinkable...

Tim Bowser is an old friend from sustainable agriculture. . . Elk Creek is a pretty cool place!

Lew,
Glad you enjoyed your first visit to the OFBC. I was there tonight and had a pretzel myself. I'm surprised you didn't go for the Philly Cheeseburger which, by the way, was developed in my home. My daugher-in-law is the head chef and my son is a cook - he probably made your quesadilla - so, of course I'm not biased or anything... But thanks for your kind words.

That sounds like a fun little central PA jaunt.

Growing up in Williamsport, the Bullfrog was what exposed me to the wonderful varieties of great beer out there, so I'll always have a soft spot in my heart for them.

Chris, I tend to avoid anything with the words "Philly" and "cheese" in the name whenever I'm more than 75 miles from Philadelphia; long-engrained habit. Besides, the chicken quesadilla sounded so good we both got one, and were glad we had!

Dubs, the Bullfrog and her brewers have done a great job getting that part of the state up to full beer speed. I doubt there are many brewpubs that are so relatively geographically isolated that do such a wide and bold range of beers.

Told you that Old Forge was super!!!

Glad you liked it, my wife and I will be back there, probably before the State Cokkege Beer Festival...:)

the Bullfrog Beesting saison and the One Guy ILA were awesome!! Had a great time. It takes me an hour to get to Grey Lodge now, but the drive went pretty quick.

Nice to see Scoats of course, and Pat [and Bill..baloss]..enjoyed the conversation with everyone.
Thanks again Lew for the encouragement.

I haven't been to The Bullfrog in some time, but the last few times I was there I thought the beers were disappointing, pretty much all tsting the same. I have yet to try a sour beer, though. I noticed you didn't stop at the Valley Inn at nearby Duboistown. Bart Reiple makes some good beers there.

Can't say I agree with you on the beers at the Bullfrog, Mark, and the sour beers are awesome. I've enjoyed Bart's beers, but we were just on a pick-up run (except for Old Forge), and at that point, we had just gotten back on schedule and I didn't want to get off of it again. Not so many choices when you've got to stay on the clock!