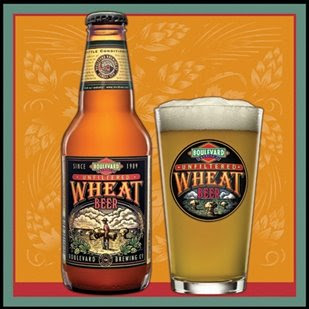 I joke that there's a "Blood Line" around Philadelphia. Outside the Blood Line in Pennsylvania, people hunt and fish as a matter of course; it's a sport, it's cultural, it's fun. Inside the Blood Line, people are appalled at the thought of hunting, Bambi killers and such, and fishing is borderline (probably because Hemingway did it, or something).

Unfortunately, Widmer's name muddied the waters in the American craft beer market. "Hefeweizen" came to be the tag for their clean-tasting (that's a euphemism for "bland") unfiltered wheat ale instead of the more robustly-flavored (that's a euphemism for "good") German-type hefes that folks like Stoudt's and Victory were making. Widmer was right in the middle of the booming PNW craft market, and soon they had competitors -- Redhook, Pyramid, and others -- all making "Hefeweizen."

Well, somewhere about the Mississippi-Missouri River line, the Wheat Line runs. West of it, it's "American Hefe," and east of it, it's "The Proper Stuff." Boulevard Unfiltered Wheat Beer is west of the line. I give them a tip of the hat, thought, for calling it "Unfiltered Wheat," so let's take it on its merits.

First, it's wicked fresh-smelling. It's like being in a brewery where the fresh beer pours right from the tap; nice job on the packaging. There's a wheaty/fruity/slightly salty tang to it, almost like apricot-scented Play-Doh. Flavor is pretty quick, but not light; there's a slip of bitterness there, and nothing cloying. This is a good cold summer beer, no doubt quite welcome in hot KC summers.

Boulevard does nice work, and I look forward to trying some of their Smokestack series later this year.
Posted by Lew Bryson at 14:40

So how does Sierra Nevada Kellerweiss fit in?

And shouldn't some of the zillions of bland wheat beers served in brewpubs even east of Downingtown take some of the heat?

And where's the love for the fact its 4.4% abv and won gold in the Session category at GABF?

Never said it was a clear, bright line, Stan! I blame the west because they call it "hefeweizen," and gave Boulevard its due for not doing so.

As for the love? This is probably my least favorite kind of "craft" beer, outside of flavored wheat ales. Boulevard's good for what it is. I can't go further than that. And we've got "session" beers back east that would kick its ass in that category...and that's a messed-up category. I see they fixed it somewhat this year, although this beer wouldn't even be allowed in now. It's a mixed-up thing, Stan.

Boulevard's latest, and one of my new favorites, is Single-wide IPA. A bottle conditioned IPA that has wonderful hop flavor and aroma without going overboard, guess that would be the 'Double-wide'!

Ehh. Of course, when you think about it, Play-Doh has a very vanilla-like aroma, so I guess it isn't all bad. Just bad association from grade school.

Is Boulevard available in Philly, Lew? "Cause it's not in Chicago (since the early 90s or so) and I'm not happy about it.

Stan, the new SN Kellerweiss is a true-blue Bavarian Weizen. It's good, but not a stand-out to my palate. Maybe SN was embarrassed by having an American Wheat (also labeled Unfiltered Wheat Beer) for so long?

Not available here, Steven; they just sent me some samples.

I remember seeing the Widmer "Hefeweizen" for the first time while in Portland, OR in the mid-90s. I thought, "Nice, a Hefeweizen!" Ordered, took a drink, and re-thought, "What the he...?"

I was all set for Hacker-Pschorr and got, well... I don't know what I got. I just said to my friends, "They have the wrong idea, or got the wrong yeast."

These days there are a few of the style I enjoy (the old SN being one), but there are too many that are just plain plain.

I liked the SN Wheat, though I didn't buy it that often. Strisselsplat was really nice.

They weren't embarrassed, but they wanted a beer that would sell more. So far it looks like it will.

"I liked the SN Wheat, though I didn't buy it that often."

Same here Stan, ashamed to say, and now it's discontinued. :-(

Reminded me a lot or Oberon, actually.

Uh, yeah -- Strisselsplat? Was it used in the SN Wheat?