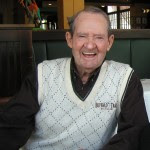 I'll be heading out to Kentucky tomorrow to attend Elmer T. Lee's 90th birthday party. Elmer is the master distiller emeritus at Buffalo Trace, and yeah, he's still very lively at 90! He is one of the few living distillers to have a whiskey named for him, and was one of the first; his Elmer T. Lee is a single barrel beauty that is hard to beat for price/value ratio.

I know I've told this story to many of you, but one of my favorite Elmer moments was at WhiskyFest New York, about seven years ago. John Hansell told me to head over to the trace table and ask Elmer for some of the 18 year old rye whiskey they had "under the table." I got right over and did that, and Elmer pulled out an unlabeled bottle, smiled, and poured me some. I went to smell it, and he said, "Now, it is 110 proof..." Oh, I thought, checked, and reached for the water pitcher. But Elmer reached out and grabbed my arm gently, looked at me and smiled beseechingly. "But it is awful smooth!" he said, with a look that told me he took this immensely personal. So I tried it, and by God, he was so right. Next year, that was Sazerac 18.

Elmer's made some of the best whiskeys I've ever had. I'll be happy to toast him with some of them on Friday. Happy birthday, Elmer!
Posted by Lew Bryson at 17:02

Oooh, I am so jealous! Just wish I could find that rye (or most of that series of whiskeys) around these parts. Tell Elmer I love him.

God bless you, Elmer! Have a great time, Lew (but I'm pretty sure it's Sazerac!).

Jeez, Sam, thanks! I was writing about Saranac Pumpkin beer this afternoon and musta short-circuited. You ARE my copy-editor!

Reflecting on this milestone, it amazes me that Elmer is still as spry as he is at an age that most folks will never achieve. I'm hardly past 50, and have some severe arthritis, among other afflictions, that limits my ability to perform 100% at times.

Then here's this fella, 90 years old and still kickin' the can, as it were, and continuing to represent a company he's been an integral part of for decades.

Congratulations, Elmer! May you maintain the momentum for many years to come!

I'm looking forward to drinking bourbon over the next two days.