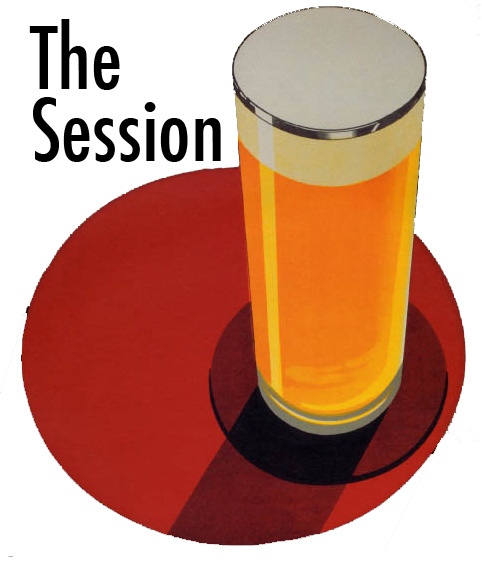 Wow, did I really miss three months of The Session? Guess I did.

Back on the horse! Our assignment this month, from David Jensen at Beer 47, is Beer Desserts.

Pretty easy. I like beer as dessert. I remember sharing a big bottle of Chimay blue with my wife after a dinner I cooked in our newlywed apartment, and it made a great dessert (because I don't bake). A simple drizzle of Triple Bock on chocolate ice cream worked in the mid-90s (because what the hell else was I going to do with half a case of the stuff?).

That was also about the time I learned about beer floats. I loved root beer floats as a kid (and Sprite floats with vanilla work pretty well too, BTW), so when someone handed me a glass of porter with a scoop of vanilla, I was ready for it. A couple years later, I was helping to plan beer dinners, and we had porter, with vanilla, with whipped cream and shaved bittersweet chocolate on top. I think the best I've ever had is Heavyweight Perkuno's Hammer Baltic porter with black raspberry ice cream in it. Oh, God, I can remember it now, how the ice cream mixed with the darkly fruity maltiness of the beer.

Guinness cake, chocolate chip cookies with Yuengling Porter, chocolate mousse made with Brooklyn Black Chocolate Stout, all that dark beer and chocolate stuff's almost too easy. But I love hefeweizen, pears, and a triple creme cheese, or a Liefmans Frambozenbier with cheesecake.

Lately I've been enjoying blended beers for dessert. I whipped up a fruit lambic mix for Fine Dining magazine recently, a blend of Lindemans Peche and Framboise I called a Peach Melba, light and effervescent. A blend that didn't make the cut for that article -- to my chagrin -- was the Doppel Espresso: two parts doppelbock, one part coffee beer. Like coffee with dessert, all in one glass.

Email ThisBlogThis!Share to TwitterShare to FacebookShare to Pinterest
Labels: food, The Session