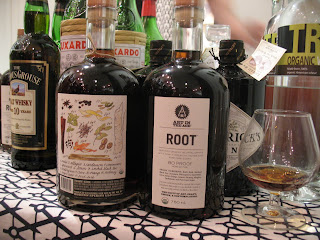 Back in May, almost three months ago, I went to the launch of Root, a project of Art In The Age of Mechanical Reproduction, a Philadelphia museum/shop/movement/institution that defies easy description. Here, go read about it.

Okay? Well, now get your head around the idea that these people not only make and sell shirts, soap, and useful accessories, they make spirits, specifically Root, an herbal liqueur that hearkens back to the origins of root beer, a tincture of bark, roots, herbs. Root itself is certified organic, and is not, as they say at the site, a flavored vodka or sweet liqueur. I'd heard about Root through brewery historian Rich Wagner, who'd worked with AITA on a display of brewery machinery and labels, and I was very curious to try it.

When I arrived at the launch, I was greeted with a glass of Root Birch, a highball of Root and birch beer (not root beer; birch beer). My notes: "The Root blends almost completely into the birch beer, intensifying the stuff that makes birch beer different (and prickly)." This was my favorite of the Root cocktails; I apologize that it was the simplest, but it was just so companionable -- and very Pennsylvania. 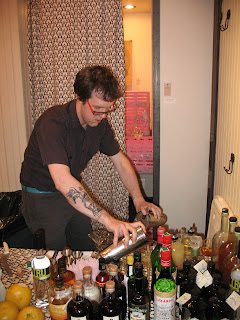 Nic Jarrett, a mixologist from APO Bar + Lounge (formerly Apothecary), was working a small but high-quality bar at the back, making three cocktails: Forbidden Root, Scots Connexion, and Root Miner. I tried the Forbidden Root*: "It's sweet, tangy, twisted, and most definitely herbal. The white grapefruit juice comes through, but doesn't overwhelm." Next I tried the Scots Connexion**: "Grapefruit peel/oils give a fresh peppery top to the cocktail, and the drink peels away from that, tires squealing; a very authoritative drink. Not soothing like a dessert, but affirming like a bracing wind."

By now the whiskey man in me was coming to the fore: I skipped Root Miner (a Martinez variation) and went for straight Root in a snifter. "The roots of the drink are clear in the smell -- root beer, birch/wintergreen, tea, anise, and a surge of bitterness. I've smelled pieces of this in bourbon. It's a sin to put this in a cocktail [I'm willing to make an exception for that birch beer highball, though!]. It's alive, it's vital and virile, but high-and-lightly sweet, like a fresh leaf of mint, with a lovely lingering finish on the back palate. I'd love to pour a shot of this over shaved ice."

I liked the stuff. I've been seeing it on some backbars in Philly, and it's in the State Store System. Try some first -- try the better cocktail bars in Philly -- and see if it's not a lot better than slamming shots of Jägermeister. And...I apologize for taking this long to post.

Many more recipes here.
Posted by Lew Bryson at 13:53

Like I said, try some of the cocktail bars in town, they're likely to have it; get a drink and see how you like it. If you don't, you saved money.

This stuff doesn't taste anything like that Austrian herbal delicacy, Stroh (note -- not possessive), does it?

If so -- insert grimace here.

Stroh Islander? Fire In A Bottle?

No, not in the least!

Can you buy this stuff anywhere outside of PA?