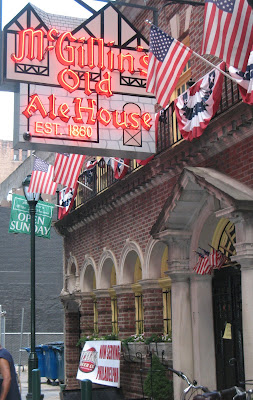 If you can, get your butts down to McGillin's tonight for a double launch: the 150 days of festivities leading up to their 150th anniversary on January 1st -- yes, really, 150 years, and if you didn't know McGillin's was Philly's oldest bar, for punishment you must read about it in a New York paper -- and of their celebratory beer, McGillin's 1860 IPA. In keeping with tradition, it's being brewed for them by Stoudt's, and reports on the beer have been very positive. Your man Joe Sixpack will be there, as will Abe Lincoln (or a reasonable facsimile thereof), who was president when McGillin's first opened their doors.

Look. If you have never been to McGillin's, well, what's wrong with you? They do a nice selection of craft beer -- a hell of a lot of Miller Lite, too, but who cares? -- and a lot of it local, they have a great bartending staff, and they make a delish roast beef sammich. I grabbed an 11 AM beer there the day of the Phillies World Series parade, it's a cool place. AND...I'll be doing a reading from Pennsylvania Breweries there on Tuesday August 11 at 6 PM. It's a short reading, mostly we'll be talking McGillin's, Philly beer, PA beer...and anything else you want. No cover, $2 pints of McGillin's 1860 IPA. Hey, what more do you want?

So if you can't make it tonight, make it a date with me next week. Happy anniversary!
Posted by Lew Bryson at 16:22