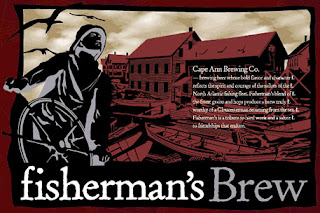 While Thomas and Cathy were touring Vassar College last Monday, Nora and I ran some errands. We went and got some copies made of my mother-in-law's house keys, we picked up some fresh-made Italian sausage for dinner (amazing, what you can find using a Garmin GPS), and we stopped at Half Time Beverage for some beer to take with. (We were staying at the mom-in-law's, and cooking dinner; she don't stock beer.) I got some Smuttynose IPA and a sixer of Cape Ann Fisherman's Brew.

I first had Cape Ann when I ran into Jeremy Goldberg at Barcade, in Brooklyn, not long after he'd opened. He just happened to be there, as did I, and I enjoyed his beer. I was happy to see it again. Fisherman's Brew is a deep amber lager, and could easily sneak into a group of Oktoberfests: plenty of malt, just enough hop (maybe a little more than "just" enough, but what the hell, it's American; and next to the Smutty, it wasn't noticeable!), and a great finish that's sweet without being cloying. A very fresh-tasting beer, and to tell the truth, I was very surprised to find one still in the cooler when we got home, because I was sure I'd polished them off. Real nice beer, and if you're not in a hophead frame of mind -- or have a pot of cabbage soup simmering on the stove -- it's gonna do you right.
Posted by Lew Bryson at 17:18

"Full well we know, that all we owe
to Matthew Vassar's ale."

Seems like the perfect destination for the younger Bryson.

Hey, where'd you get the sausage, I'll be down that way next week, be a nice dinner addition.

Glad to find someone else that likes Cape Ann products. The Fisherman's Brew and the IPA are quite tasty, especially if you just want a good-quality, drinkable beer in your mitts without getting your tongue ripped out. Sadly, I haven't seen it in Virginia in quite some time.

Buzzards Bay is another brewer making plenty drinkable stuff from Massachusetts. Don't even get me started on Western Mass., 'cos I could keep goin'...