Rare Beer Tasting at GABF to benefit Pints for Prostates 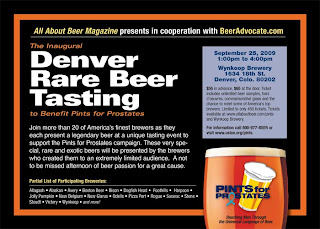 My good friend and fellow drinks writer Rick Lyke survived prostate cancer -- thank the Good God -- and as a way of giving back, founded and grew Pints for Prostates, a group for raising awareness about prostate cancer screening...through beer. Rick's raising money for the cause with the help of American brewers, All About Beer magazine, and BeerAdvocate, through a Rare Beer Tasting to be held at the GABF.

80% of the tickets are already sold! If you're going to be in Denver for GABF, take a look at the drool-worthy list below, and TRY to tell me that ain't worth $55! Details are on the graphic (click on it to see it full-size). Get your money down, people! Tickets are available HERE.


Beers at the Tasting:
Allagash Fluxus ’09: This saison from Maine is brewed with sweet potatoes and black pepper, weighing in at 8.3 percent alcohol by volume. Jason Perkins will represent the brewery.

Alaskan 1999 Vintage Smoked Porter: The last known draught keg of the 1999 vintage of Alaskan’s much decorated Smoked Porter. This beer will be served alongside a sample of 2008 Alaskan Smoked Porter for comparison.

Anheuser-Busch Pilot Batch: This is an experimental beer from Anheuser-Busch so rare that only brewery insiders and a few lucky beer journalists will ever get the chance to taste the brew. Get ready to be surprised. Kristi Saviers will represent the brewery.

Brooklyn Wild 1: This beer started off as a batch of the popular bottle-conditioned Brooklyn Local 1 farmhouse ale, then spent nine months in Bourbon barrels and then it was bottle conditioned with Belgian re-fermentation yeast and a strain of Brettanomyces bruxellensis. Only 80 cases were made for consumption by Brooklyn Brewery staff. Garrett Oliver will represent the brewery.

Deschutes Black Butte Porter XX: Brewed in 2008 to celebrate Deschutes’ 20th anniversary, this 11 percent alcohol by volume beer was pulled from the brewmaster’s private library. This beer starts off as a Double Black Butte Porter, has cocoa nibs and Bellatazza Coffee Roasters’ Sumatran and Ethiopian beans added, then it is aged in ex-Bourbon barrels. Brett Porter will represent the brewery.

Dogfish Head 2006 Raison D’Extra: This is a super charged 18 percent alcohol by volume version of the popular Dogfish Head Raison D’Etre. The brewery has not made this brew for the past two years.

Foothills Barrel Aged Total Eclipse Stout: One of only 10 kegs of this beer in the world. This North Carolina brewery took its award winning stout and aged it for three to four months in ex-whiskey barrels that previously held 23-year-old Pappy Van Winkle Bourbon. Jamie Bartholomaus will represent the brewery.

Highland Big Butte Smoked Porter: Winner of the Highland Cup homebrewing completion and based on a recipe created by Alex Buerckholtz, this beer is only available for a very limited time in North Carolina. Features smoked German malt and Fuggle hops. John Lyda will represent the brewery.

New Glarus Golden Ale: This Belgian-style ale is the first of the Wisconsin brewery’s R&D Series and previously was only available at the brewery. The 7 percent alcohol by volume beer is bottle fermented with Brettanomyces yeast. Dan Carey will represent the brewery.

Reunion – A Beer of Hope: This Double White Ale was collaboratively designed and brewed by four brewers across the U.S.: Bison Brewing and Pizza Port Brewing in California, Elysian Brewing in Washington and Terrapin Brewing in Georgia. This Belgian-style witbier uses sweet orange peel, coriander, lemongrass and rhubarb root. Sales of the beer support The Institute for Myeloma & Bone Cancer Research. Daniel Del Grande and George Allen from Bison Brewery represent the brewers.

Stone 2008 Old Guardian Barley Wine Aged in Red Wine Barrels: This 95 IBU barley wine has a massive malt character that is made even more complex thanks to the barrel aging. Greg Koch and Mitch Steele will represent the brewery.

Stoudt 2007 Barrel-Aged Reserve Old Abominable Barleywine: This vintage barleywine from Pennsylvania was aged for 10 months in oak whiskey barrels before being keg conditioned. Carol Stoudt will represent the brewery.

Wynkoop 2008 Barrel Aged Berserker Mead: This 11 percent alcohol by volume mead was made using Colorado wildflower honey and has spent about 20 months in barrels that were formally the home of Stranahan’s Colorado Whiskey. C. Andrew Brown will represent the brewery.
Posted by Lew Bryson at 14:37