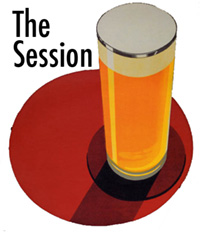 I'm not really completely clear on what this month's assignment, from Andrew Couch at I'll Have a Beer, is. Or rather, I'm fairly sure I get it, but I'll be dipped if I can state it concisely. So...go read it. Meantime, what he did mention was blind tasting, and I do a lot of that, have for years, and I've enthused about it. It's kind of standing this idea on its head, but that's what I'm going to do.

I've had this bottle, an unmarked 22 oz. brown bottle with a plain gold cap, sitting in my Dedicated Beer Fridge for...years. I don't remember where I got it, whether it's homebrew, or brewpub sample, or a commercial beer the label fell off; I have no idea. So...nothing is giving me any expectations on this beer. There is no 'framing.' I don't even know if it's light or dark. This is the beer I'm going to open, drink, and write about...blind. 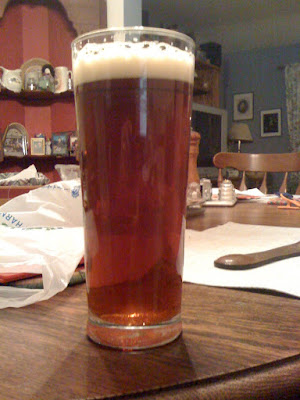 As you can see, it's a nice amber/copper color. The aroma almost confirms it's an ale: fruity beyond hops, although there's clearly some hop character there, which is pretty impressive, since I know this has been in the fridge for at least three years. It actually smells like it might be a barleywine or a DIPA. There's some sherry character too, oxidation, which makes it more likely that it's homebrew or brewpub hand-bottling...but not definite. The aroma's strong enough that I can smell it clearly from a foot away.

Wow. It's big in the mouth, too. Hoppy, but not overly so; I'd peg this as a barleywine rather than a DIPA, because it's for sure got the power. There's bitterness spined down through it, but the malt's playing the winning hand. Actually, the oxidation's winning...and for me, that's not all bad: I like the sherry character, because this one's big enough that it doesn't go over the top. But I can't help thinking it would have been a real cracker when it was fresh. Gotta start drinking 'em when I get 'em!

What's this tell me about framing? Dunno. What's it tell me about blind tasting? It sharpens the senses and the brain. Not only do you not have the shortcuts that labels and styles deliver, you don't have the work of trying to objectify those inputs, leaving you free to focus on the beer, and nothing else. It kind of puts "style" in the backseat -- or the trunk -- which is where it belongs when you're drinking beer. All in all, a good exercise. Thanks!
Posted by Lew Bryson at 20:14