Whirlwind Tour of a whirlwind tour -- Monday and Tuesday 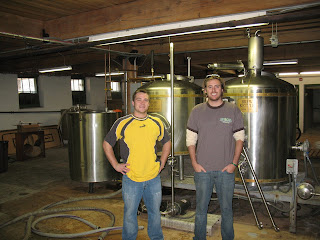 Here's what I did the past four days.

Monday -- Visited Roy-Pitz Brewing in Chambersburg. Ryan and Jesse's brewery looks like something from the early 1990s -- in a basement, lots of used equipment, hand-written signs -- but the beer's better than that. Everything but the Gobbler Lager was pretty good stuff (the Lager had suffered from a production problem and was borderline). Not crazed hopheads, and having more success in Chambersburg -- a craft black hole almost as bad as south Jersey -- than the last hometown brewer, the late lamented Arrowhead (please, don't anyone tell the state how far out of date their tourism website is; Arrowhead closed in 1997!). 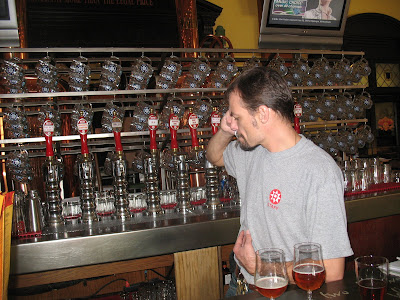 Up over the mountains on Rt. 30 (whee!), then on into Greensburg to visit Red Star, now the Red Star Agave Grill (which was a bear to get to, thanks to downtown construction). Whatever. It looked pretty much the same as ever, and the menu, while sporting a few Mexicanish items, seemed pretty eclectic overall. The beer showed no agave influence, thank God, and I'm here to tell you that the Canvasback nitro pale ale still rocks, and Jeff Guidos definitely knows how to make a barleywine.

Stopped at a Primanti Bros. for a sweet sausage sammich to get something in my belly: 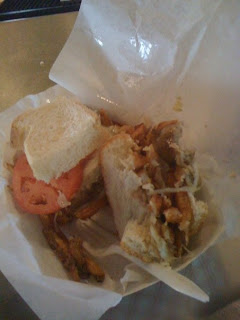 believe me, that's a great way to do it. On to Latrobe to City Brewing, the old Latrobe Brewing. A few changes here -- the offices and Rolling Rock Museum are closed, it's not quite as busy, some of the cheesier automation has been removed -- but it looked largely the same as before. Except, of course, no more fleets of green silk-screened bottles. They're making Iron City here now (and Southampton's 12 oz. beers, and they taste fine).

Down into Pittsburgh for a presentation on the North Side at the Teutonia Männerchor hall for Vecenie Distributing. I talked to a bunch of bar and distributor owners about craft beers -- told them how craft is missing a great opportunity by not making more helles/kölsch-type beers for the mainstreamers who want to buy local -- and answered questions, then went to my hotel for the night. 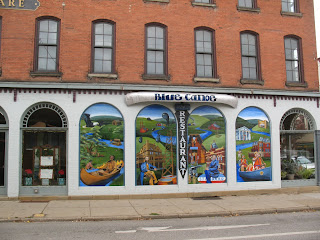 Up early the next morning for breakfast at Pamela's P&G in the Strip, then I headed north at high speed. Stopped at Voodoo Brewing (not open; Matt Allyn had told me the night before he wouldn't be able to meet me, but I wanted to see the place; looked much the same) then buzzed over the hills to Blue Canoe, the old Four Sons, where Justin Dudek was brewing and took me through the taps. Pretty much uniformly good, and I was pleased and surprised to see "Dead Tony's Trippel" still on the menu, an old Four Sons' standard. Menu looked fantastic, by the way. I'll be back to this at some point.

Another "I'll be back" is Sprague Farm & Brew Works, where I went next. Brian and Minnie's beers were at least good -- the Hellbender Porter is still very good -- and the "pub" they've made out of the property's barn is just fantastic. Brian told me this is where the cool folks in the county hang out, and I have no reason to think he's kidding; I'd hang out there if I could. Awesome, all the way from the high bowed roof and the "beer hall" (which is just that; a hall where you can drink beer) to the milk bottle beer glasses. I'm thinking about celebrating here when I finish the manuscript.

Back in the Jetta and down to Pittsburgh, where I was "teaching" Craft Beer School with Tony Knipling of Vecenie Distributing and Scott Smith of East End Brewing: the topic was Session Beers. I realized I had just time enough to pick off one bar on my list to visit, and I picked brillobox; glad I did, too. Pretty little place, and I had a nice glass of Bell's Two Hearted, always a good choice.

Craft Beer School went great; something around 190 people, all very interested and having a lot of fun, and asking some good questions. Tony and Scott and I went to Six Penn for a beer after; nice place, an upscale eatery from the Eat'n'Park people. Then I caught a gypsy cab over to Hofbräuhaus to hook up with Brian O'Reilly, as semi-detailed here. Kind of. I was really tired and a bit over-served when I wrote that, and I fell asleep during the last paragraph. Glad you can edit in Blogger.

Gotta get back to work; I'll get you the rest of the trip shortly, and I still want to post about my recent trip to Yuengling.
Posted by Lew Bryson at 13:39

I have to 2nd the lack of craft beer in the Chambersburg area- have to either hit Frederick MD or Appalachain in H-burg or Gettysburg. Reminds me of... well, liek you said, south Jersey! If it weren't for home brew, Roy-Pitz, and the guys at In and Out Beer Distibutors, I'd go crazy...

That sandwich looks so good. Makes me want to drive to Pittsburgh tonight!

I no longer live in Chambersburg, but In and Out does an awesome job of stocking craft beer. One of the better distributors in Central PA!

Are they making Stoneys in Latrobe these days too?

A tiny little bit, yes. Folks in the know told me they doubt Stoney's will survive past 2010.