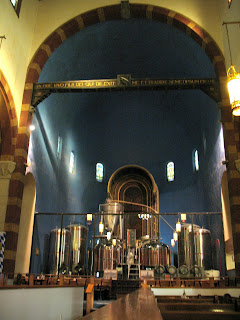 Picking up where I left off...

Wednesday morning I had another great breakfast at Pamela's (what can I say; it was close, it was delicious, it was reasonable, and it was served quickly) and made the short drive to Church Brew Works. Sean Casey was up on the roof -- literally, they're having the roof repaired, and he was up taking pix, some great ones of him sipping tripel with the skyline behind him -- while I was running the taps with brewer Brandt Dubovick. Excellent overall quality.

Then they took me downstairs: Church is seriously gearing up for production: more and bigger tanks (Sean seems to be collecting tanks), new bottling line, new six-pack holders (not sure why they're not buying kegs; "Draft drives bottles" is an industry truism). As Sean said when I left, "Thanks for visiting Pittsburgh's biggest production brewery!" Kind of shocking thought, but as of right now, he's right. 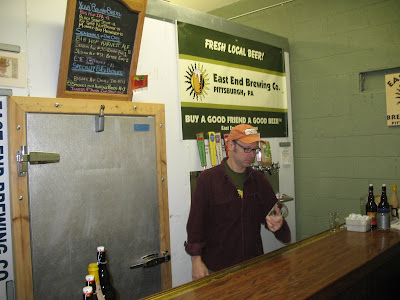 After that, I took it up the hill and down through my old Shadyside neighborhood to East End Brewing, where Scott and Brendan were hustling to get ready for some bottling. Scott showed me the new tasting area -- right inside the door! How's that for convenient? -- and we tasted some beers, and talked about what a hard worker Brendan was. Beer tasted pretty damned good, BTW.

Running about an hour behind, now, as I kept missing the turns my GPS advised (a combination of really loud music -- it was too nice a day not to -- and the GPS being terribly confused by Pittsburgh streets -- nice to know it affects machines, too), but I did finally make it to 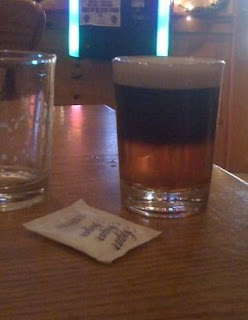 Rivertowne Pourhouse, where I was soon drinking samples with a very relaxed crew of brewers: Barrett Goddard, Andrew Maxwell, and Sean Hallisey, along with Mark Kegg, their partner (along with North Country brewer Sean McIntyre) in Full Pint Brewing. We worked our way through the lineup -- real good, even the damned fruit beers -- and started playing around, like the world's smallest black'n'tan you see to the right (note the sugar packet for scale). Full Pint is just waiting on a Dec. 1st zoning meeting, and they're so ready to go they might just head over after the meeting -- assuming it goes well, and they think it will -- and start brewing. Four of their own beers, and two each from Rivertowne and North Country, and yes, they're talking about doing a variety case with 8 beers from each of the three different breweries. How's that?

I finally walked out into the drizzle that was now falling lightly, and headed down to Hofbräuhaus. It wasn't an official visit, I just wanted to go again, in the daylight. Got a half-liter of Dunkel -- very nice -- and a bowl of cabbage and hax'n soup -- also nice, thick, if a bit salty -- and the oft-recommended sauerkraut balls, which were actually a big disappointment: mostly just doughy. Great place, great beer, amazing view of the river, but...where does one park, particularly when 'one' is the 600+ people this place can seat? There is no garage, there is no lot. I honestly can't believe this was approved. I'm all for the place, it's done well, but who planned this parking? No transit either, other than buses over on Carson Street and the rare Pittsburgh taxi. I don't get it...

Anyway, then I went to Bocktown Beer & Grill, where I had an event. Bocktown's a great little place; Chris gets some seriously rare and delicious beers in, and her new chef is just rocking it, we had excellent pairings for the barrel-aged beers we tasted. I got to talk a lot about whiskey, which is always a pleasure, and then we talked far into the evening. I finally, reluctantly, dragged my carcass down the hill to the hotel, and pretty much collapsed, exhausted, into bed.

There are 4 (at least 2 are regularly open) multi-storied lots about a few hundred yards away from Hofbrauhaus. I think the closest one is at the corner of 28th st. and tunnel blvd.

Thanks for the detailed writeup on the trip.

The garage that Matt mentions is across the street and a block east, although it may be unavailable to the public during weekdays. (It's open at night, and costs a dollar an hour.)

That lot is indeed unavailable to the public during weekdays, sporting signs that say "American Eagle Customer Parking Only" or something like that, so I just pretended to be an American Eagle customer instead. Free parking!