Remember that trip to Pittsburgh, and I told you I'd get back to you with the last day? I'm here!

The day started with horrible traffic under weeping, cloudy skies, as I struggled to get from my hotel by the airport to the Hot Metal Diner in West Mifflin. Well, I got there, and I was running late for my Rock Bottom appointment with brewer Steve Panos, and a good person would have said, you know, I can't really get breakfast here and still make that appointment, so just get a McMuffin and keep moving.

I'm not a good person. And I'm glad: the breakfast burrito at HMD is deliriously, stupidly good and big, and it easily kept me going through what would be a semi-grueling day. Smart decision, in the end, and I wasn't terribly late, either; traffic finally cleared up. The only down side: finally seeing the Walgreen's where Chiodo's used to stand. Damn. 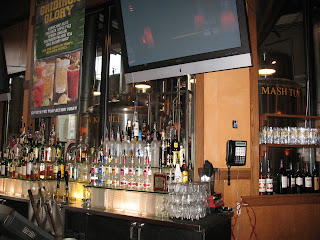 Rock Bottom Homestead is chugging along. Steve was brewing while I was there talking to him, and we talked biz -- good, volume is going to be a bit more than it was last year -- Portland -- Steve is coming in from brewing there, and misses it, a little, kind of -- and what sells: seasonals, and the Velvet Pale (pale ale on nitro with a dose of oats in the mash). Sorry I don't have a picture of Steve; he was moving too fast. Good lineup of beers, and man, they sell them at a reasonable price. Don't overlook this one!

It had cleared up a lot when I walked out, and I was cheerful: cross-country drive to Marzoni's! Yeah, well, forget that. The weather quickly went to hell, and I was boring through mist and drizzle across the roll and dip of the PA Highlands. Some truly stupid drivers out there. Marzoni's was good, and as brewer Bill Kroft told me, other than the Allison Park location closing last year, things were okay. The concept's not dead, he said, though he admitted that it wasn't likely that Hoss's would try another in this dark economy. I did notice that besides the beers still tasting good (Bill had a Belgian IPA on; no, really, and it was good), the place smelled good, that delicious good-pizza-place smell. If I weren't still cruising on my breakfast burrito, I might have had to get me some. But I was, so I took off for Otto's. 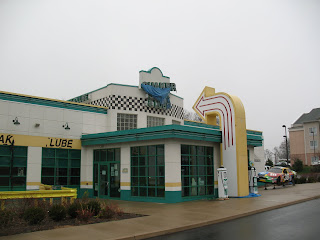 More nasty driving later, I pulled into Otto's, just in time for Sam Komlenic (who was there to get some gift whiskeys that had somehow arrived from Kentucky...I heard...) to take Charlie Schnable and I down to what's going to be the new Otto's, the former State College Quaker Steak & Lube. Yeah, the one that crashed and burned. QSL's loss is Otto's gain: this place will be great as Otto's new digs. Plenty of parking, a very big and capable kitchen (once they take some of the seven oversized deep-fryers out), three bars, and lots of bizarre automobilia that they'll be removing (an intact top-fuel dragster, an intact Corvette (and another missing only the engine), a QSL custom chopper, a sprint car, and a ton of other miscellaneous crap that is, as Sam put it, evidence of the incredible hubris of the original owners). Anyway, much needs to be done before Otto's can move in, not least of which is a major redecorating, but the kitchen essentially just needs to be cleaned.

Back up to the current joint, where I ran the taps (real good, especially the Old Fugget barleywine on cask) and had a delish-type meatball sandwich (so not Sysco), and, finally, bid Sam farewell and aimed the Jetta homeward. I got there just in time to unload and go to a capella rehearsal, and then finally went home and relaxed with the family, little dogs and all. A very good four day trip.
Posted by Lew Bryson at 10:55

What a western PA trip without a visit to Jones Brewing Co?

Hopefully Latrobe will start some tours.

As for Pittsburgh, I lived in Pittsburgh in 94-95, part of that time in West Mifflin. The area around the airport was pretty empty. I do remember the PATH garage though. But it seems that Pittsburgh which used to be a place that never changed has really changed a lot in recent years. There are a lot of great places and fun things to do. Everytime I go there, i see something new.

Unfortunately, no tours planned at Latrobe, and I don't see that changing.

Rock Bottom in Homestead is definitely a horribly underrated place in Pittsburgh (worth fighting your way down to the Waterfront for)...need to get out that there's a Portland-trained brewer there!!

To be honest, I've always thought that Quaker Steak and Lube was seriously overrated; the portions are overpriced, and the sauces, while good, can be found just about anywhere nowadays. Good on Otto's for taking advantage of franchise misery! (Though beer and automobiles as decor works...you went to Double Wide!) UnfortunatelyI've never been to Otto's (though had the beer several times, including personally with Charlie at the Ohiopyle fest)...that's a must-do on the list (maybe over Christmas break if there's a gap in bad weather; Washington, PA to State College is not a trivial drive).