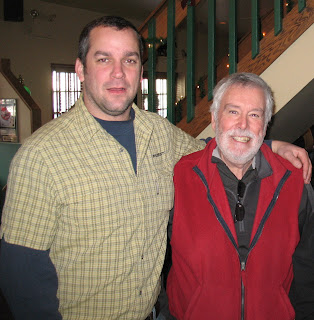 According to his own Facebook profile, today is Jack Curtin's birthday. (That's Jack on the right, in red, with the Beer Yard's Matt Guyer at -- I think -- last year's final Sly Fox IPA Project. (It was.))

Jack and I have tried to remember when we first met, and failed: it was almost certainly at Copa, Too!, but nothing's certain. That hasn't stopped us from slinging crap at each other (it's there, page down) for years with vigor and joy. It's almost all in fun, and I've dubbed him Uncle Jack and he's dubbed me "America’s Most Beloved Beer Writer (© Jack Curtin’s Liquid Diet 2009)". And when we do stuff like this on our blogs, everyone wonders why we waste our readers' time. Well...there aren't a lot of beer writers, and we're largely solitary types, so maybe we get a little odd. Live with it, and if you see Uncle Jack today, tell him how good it is to see him. He likes that.

(You just have to wonder about this guy, though; especially since his middle name appears to be Lew.)
Posted by Lew Bryson at 09:16