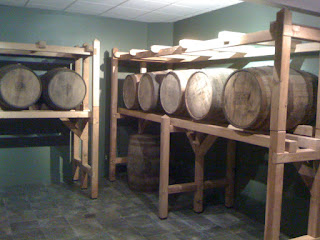 I visited PA breweries last Thursday: the new ShawneeCraft, Barley Creek, and the two Brew Works, Bethlehem and Allentown. It was a long day: drove up along the river to Shawnee at 7 AM, got back from Allentown at 6:30, about 188 miles all told. Good, though.

ShawneeCraft is an outgrowth of the Shawnee Inn in the Poconos, right along the Delaware river. Leo Bongiorno is the brewer (formerly of Butternuts, and, well, a lot of other places; he's been in the biz about 16 years), and yes, the stories you've heard of an ambitious barrel-aging program are all true (that's the racks in the taproom at right...but those are all empty, for now). Leo's doing some barrel-aging now -- bourbon barrel stuff -- but even that's just step 1: he's really doing that to get the barrels clear for bug innoculation (and to make some money, to be truthful). But that's going to take over a year till he's got some sour/brett beers ready; in the meantime he's brewing stuff like the pumpkin saison I tasted. It had an amazing volatile spiciness that floated high in the mouth, as energetic as ginger but different. Fresh-ground mace, he told me, and it was brilliant. They've got the brewery set up in an old ice hockey rink, and the taproom is the Gem & Keystone Inn, a nice snug two-story bar and restaurant up by the road. That's open now: stop by.

Barley Creek was next, and as always, it looked different from the last time I was there. The deck was fully enclosed for more seating and another bar (nice: underlit, creamy butter color, streaked like marble). I joined Trip Ruvane and brewer-for-life Tim Phillips at the bar and ran the taps -- Rescue IPA opened my eyes: forget what you thought you knew about IPA at Barley Creek. Woof. The chef made a little tasting menu, starting with the always fun Crane's Crazy Chip Dip, some sandwiches (a great veggie/pesto one, and roast beef with horseradish cream), and delicious garlic shrimp. Beers were clean (especially the light; impressive) and tasty, though my favorite Renovator Stout was not on (supposed to be on this week). 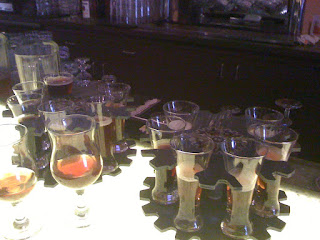 More breweries to come...and more pix, when I get a moment.
Posted by Lew Bryson at 16:24

You know, I never knew that the term "lambic" was an appellation until I noticed you put it in quotes above. I guess you learn something new every day here at STAG!

That's what I strive for, Russ.