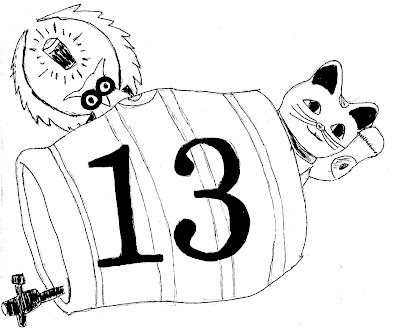 The Grey Lodge Pub is probably the only bar where I come close to being a regular. It's been a favorite of mine for years, since Thomas was in first grade...and he's looking at colleges now. The place has changed a lot, but one thing stayed the same: everyone is welcome. Actually, two things: it's always been a bit different. "Quirky," as Uncle Jack put it, and the owner, Scoats, embraced the word.

He's embracing it with both arms on August 15th, when the Grey Lodge celebrates its 13th anniversary. And at a place that celebrates Friday the 13th, you can bet that the 13th anniversary is gonna be big. Check it out: they're doing 13 events in 13 hours.
It's all here. Dock Street brewed a special beer, there's stand-up comedy, Philly Brewing's bringing a firkin of Mayfair IPA, Weyerbacher 13 (appropriate), some VERY Old Old Horizontal (23 bottles from 1997), Stoudt's Keller Pils (I want that!), birthday cake, a bar mitzvah, two Yards firkins (including the new Cape of Good Hope IPA), Sly Fox eggs, Sunshine Pils, and ring toss with Casey Hughes (you want to toss the rings over the traffic cone on Casey's head; if that's too silly, you can just piss off MADD instead and drink Exit 4 and Exit 11).
It is, in short, something that would have warmed P.T. Barnum's heart, and definitely "quirky." A crazy marathon of beer, food, music, and fun. I'll be down in the afternoon; hope to see you there.
Posted by Lew Bryson at 11:07

So thirsty, and within easy cycling distance. Oh the joy!