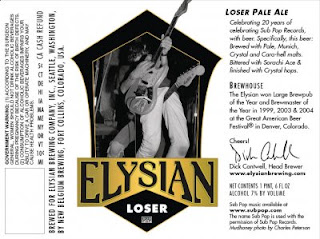 Great name for a beer. Loser is a special release from Elysian, brewed and bottled under their agreement with New Belgium (genius, that: works for both places, and gets Elysian enough volume that they can send beer to Philly). It celebrates 20 years of Sub Pop Records, the beating heart...er...the soul of -- no, the extended middle finger of the Seattle sound. The label picture kinda says it all.

Now, about the beer. Elysian was good enough to send me two bottles, and damn, I'm enjoying it. It's got some real body to it, chewy but not thick, and a nice burnt-sugar edge of caramel. It's kept in line by a little thrill of alcohol (Loser's 6.5%, so respect is advised (yes, I know the label above says 7%, but mine says 6.5%; whatthehellsupwiddat?) and a firm line of hop flavor and bitterness. Loser's sweet but bitter, doesn't leave any sticky crap on your palate, and doesn't have a lot of pretentious über-beer horseshit to it. I kinda hope it sticks around: I'd hate for this to be a limited edition pressing that collectors talk about and nobody else gets to listen to.

Loser is a beer for drinking, not really for talking about, or getting all berserk about. I can't see the geekerie squealing about it, and passing each other notes in class to say where they can go get some Loser!!!1@! That's the kind of stuff I'm seeing from Elysian...enough so that I might just have to give Avatar another shot.
Posted by Lew Bryson at 15:26

I had the good fortune of taking a business trip to Seattle in late July. I hit the Elysian location near Safeco Field and their beer was excellent. No Loser though. Previously, I had number of their brews at The Blind Tiger and Mugs Ale House in NYC.

Off topic alert: I heard one Iron Hill-Maple Shade patron telling another patron about your blog. The word "genius" was overheard ( i was totally eavesdropping) and he was discussing your One Guy post.

Actually, I think the geekerie will squeal about it for it features the exciting new (to us) Soraci Ace hop from Japan. I've been doing a little squealing, but unfortunately no drinking--I was out of town when it poured at the Oregon Brewer's Fest and I haven't otherwise seen it.

BTW, if I were forced to make a top ten list of NW breweries, Elysian would definitely be on it. I might even make the argument that it's Washington's best brewery. Avatar is not their best effort, though. For sublime, try The Wise ESB. Perseus Porter and their pils won't let you down, either. And they've been making a Saison since, I think, the 90s--long time, anyway.

I love this.....I can't see the geekerie squealing about it, and passing each other notes in class to say where they can go get some Loser!!!1@! As usual, Lew hits the nail on the head!

Thanks for explaining the label. I thought they had gotten a picture of my husband at an open mic night somewhere.