Oktoberfest at One Guy gets permission to "oompah" 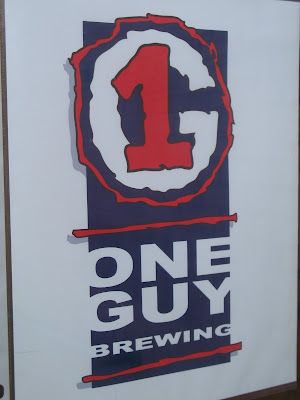 Just got a note from Guy Hagner at One Guy Brewing in Berwick; the brewpub has been cleared for live music by the borough of Berwick's zoning panel. The vote was unanimous, and as soon as Hagner and partner Tom Clark can get an amusement permit from the PLCB, the music will play. One Guy's Oktoberfest is planned for the weekends of October 8-11 and 15-18 (both of which I will probably miss, dammit).

"Also, One Guy Brewing might change its name, Hagner said. When he opened the business 19 months ago, he ran everything by himself. Now, he has a business partner, Tom Clark, and several employees."

Jeebus Christmas, now that would be a dumb move. One Guy is a name that stands out, it's quirky in a real good way, and it captures the smallness that so many people find appealing about craft beer. And there's still only one Guy! Hope they think long and hard about this!
Posted by Lew Bryson at 15:02

Guy, KEEP THE NAME! You've got a ton of positive name association going there, and things have been pumping along pretty well, so why mess with success?

Sure hope to see you for the second weekend of Okto festivities!

I hope Guy keeps the name. As a local that moved out of the area, it is a place that I look forward to coming to now that the pizza is going. I can't wait for their Oktoberfest.

I'd keep the name as is. It will then always be a reminder of the company's humble beginning.

Keep the name, change the name, a name is a name. What's important is what is going on inside.

Anyway, I can't believe they need an "amusement permit" just to have live music.

It's true: check out the Grey Lodge's admission that they, too, have an amusement permit: http://www.greylodge.com/

A little off topic but does one guy have a website? Google doesn't come up with anything. Just looking for when they are open to plan a trip. thanks