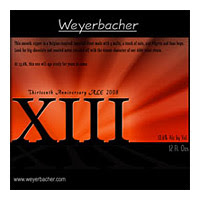 Just had Weyerbacher XIII last night at the Grey Lodge Pub. In a small glass. Thirteen celebrated the brewery's 13th anniversary (last year), so of course the Grey Lodge had it on Saturday for their own 13th anniversary festivities (it was a good time, wish I could have stayed for more). But I didn't get to that, I was there at the wrong hour...So I made up for it at last night's Gary Bredbenner memorial (very nicely done, some tears, good eats, good beers, good friends).

Briefly? Thirteen kicked big beer ass. It's an imperial stout mashbill (five malts and some oats) with made with the Belgian yeast strain Weyerbacher uses for their Quad and Merry Monks. You've got the chocolate from the dark malts -- without the burnt bitterness that often comes with, that I usually like to find in an impy -- but with the curling spice from the yeast, and a dark pitfruit note, probably from the five malt mix. Wish I would have tried this last year, but damn, it's aging quite gracefully.
Posted by Lew Bryson at 11:41

I think I got one of those. I think I have a Friday night coming up. Things are working out very well.

I had XIII last summer at almost the same time of year, but it was at the Human Foosball party which Dan and Suzanne hold every summer (this past weekend this year, but I missed it) and I was very impressed. Thing was, in the hot sun in the Weirback back yard out of a plastic cup, I couldn't really grab onto all the goodness. Now you have me thinking I needs must find a bottle somewhere. The Beer Yard leaps to mind (so long as Matt doesn't read this)...

Aged well. I had it on Saturday at the party, and I saw you dive into it last night. Damn good beer! The 14th Anniversary from Weyerbacher is another one to try if you haven't. It's a cross between a barleywine and a wheat. The bananas and cloves hid the big alcohol flavor. It's one of those beers that creeps up on you after you have a few.

Glad to hear the positive report about XIII. Never had anything from Weyerbacher, and this Texan is looking forward to trying it among other East-ish gems the family just picked up for me out in NC.

Pretty sure I have 3 of these. One of the last beer runs in my personal "Big Beer Phase"