As promised, Jay Brooks and I headed out early to Allen & Son outside of Chapel Hill on Saturday morning, and also as promised, we got us some serious pig. Allen & Son was every bit as good as it was last year, although Jay and I disagreed on the fries: he likes them crispy, me, I really like a good meaty fresh-cut fry where you can taste the flavor and texture of the potato. Jay called this "soggy." To each his own, I guess (even though I know damn well I'm right). Minerva took us by kind of an ass-backwards route, but eventually we got there, about 10:10 AM.

I got Brunswick stew and pulled pork, Jay just pork. The stew was okay, sweeter than I like, but with a nice smokiness from the meat. The meat...I have been told that NC BBQ is more about the meat, the pork than anything else: sauce, sides, or smoke. To quote a wiser...no, better...no, taller man than I, that's crazy talk. Smoke in the meat. That's what makes this great BBQ. Many NC barbeque places have gone to electric or gas "pits" and the lack of smoke in their meat has been rationalized: it's about tender pork and the vinegar sauce, we're told. Well, as I found at the Barbecue Lodge, that can be good, but it's not fantastic, like this stuff was.

And it was. I'd describe it, but I've already wet myself once. Jay ordered some peanut butter pie -- he has addiction issues in that corner, though he did say this one could have been more intensely peanutted -- and I went to the counter to get Penderyn another BBQ bone. I need a bone for my dog, I said. Oh, says Karsten, our waitress, what kind of dog do you-all have? A Corgi, I said, in fact, I sent you a letter about him saving my life and you were kind enough to send him some -- "I remember him! I sent you those bones! How is he?" she squealed. We talked dogs a bit, and I left, grinning. 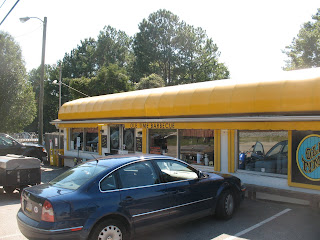 Well, we felt so good, I easily talked Jay into whipping over to Raleigh for more barbecue at Ole Time Barbecue outside of Raleigh. (That's not a picture of how I rammed the Passat into a schoolbus, by the way: that's what their joint looks like!) A great idea, for many reasons. First, it was a gorgeous early October day and a fun ride. Second, the pork was a very close second to Allen & Son, smoky and delicious, even without their quite nice sauce. (The fries...not so good. Wedges. Yuk. But I had boiled cabbage, which was perfect.) Third, the sweet tea rocked, made fresh, and re-filled fast and often (and when we were ready to go, our waitress topped us up and capped-and-strawed it for us). Finally, two barbecue lunches/breakfasts (first eats of the day!) gave us a solid drinking base when we headed back to the festival.

In short, Saturday's barbecue experiences were every bit as exceptional as Friday's had been unexceptional. Saved the trip for me, by golly.

More to come on the festival, my talk, and session beer in Virginia.
Posted by Lew Bryson at 11:57