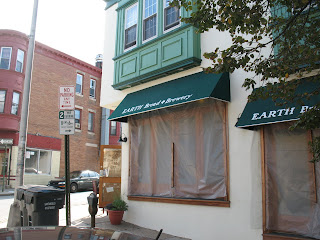 Since I'm not going to be here on Thursday for the opening at Earth Bread + Brewery, I bugged Tom to see if I could come over today (I was going to be in the neighborhood anyway to pick up my daughter).

"Sure, sure!" he said. "As long as you don't need too much of my time; there's a lot going on." No more than I expected; I mostly just wanted to see the place.

To the left is what it looks like from the outside today; windows still covered, but awnings in place. The inside is still a bit dusty and scattered, but it's obvious that they're close to done. As it turned out, Tom wasn't even in when I got there, and didn't show up before I had to leave. 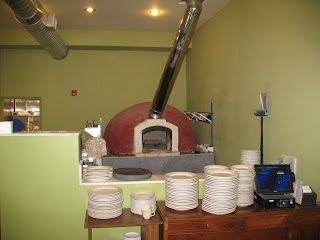 At the right is the pizza oven -- oops, the flatbread oven. It's right out in plain view, and wholly wood-fired. That's according to Peggy, who was there. She told me that they were running it at about 750°, but had taken it down to about 650°. It still does a flatbread in about three minutes. I did ask about whether it was wholly wood-fired, and she confirmed that: no gas lines.

Here's another tip: EB+B is neither vegan nor vegetarian. I heard Peggy ordering sausage for the flatbreads. Woo hoo! (They also will have two salads, a cheese plate, a plate of mixed olives and garlic that gets heated in the oven (that sounds good), edamame (sorry, I hate those things...), and house-baked desserts.) 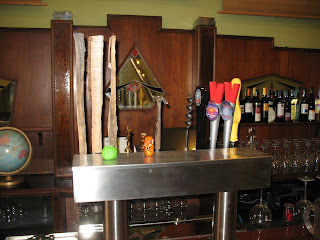 But you really want to know about the beer, right? Well, I tasted it. The Love Your Mother Mild (which is on the "Mother" tap, a dedicated low-alcohol beer tap!) was delicious, one of the best American-brewed session-strength beers (3.2%!) I've ever had: malt, yeast character, smooth, incredibly drinkable, and a great balance of flavor. Excellent.

The Biere d'Earth is, as you might guess, a relative of Biere d'Art, the late lamented Heavyweight beer (that Tom will have a 4 year old cask of for the opening): mellow, maltalicious, with a spicy flow of yeast character. (Yeah, the three taps are three sticks of firewood.) 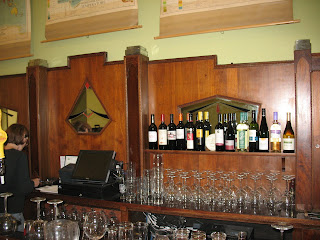 Sedgwick Pale Ale was brewed with locally grown (like 4 blocks away) hops a homebrewer gave Tom, and lemon verbena. The beer was arresting, with a rich aroma of spicy candy, almost toffee-like. Delicious and completely unexpected, like the best of the stuff Tom brewed at Heavyweight. The last of the four, Terra Fumé, was a smoked wheat, and the smoke was rich and solid in the nose, but not overdone in the mouth. Great with a deep tomato sauce, sausage, or cheese, and light enough to easily drink on its own.

This is going to be a great addition to Philly's beer scene, I'm thinking. God knows we could use more brewpubs.
Posted by Lew Bryson at 16:50

Hey Lewcifer, how big is the brewhouse at Earth Bread & Brewery?

Believe it or not...I didn't ask. Anyone who knows, feel free to chime in.

It's as big as the Heavyweight brewhouse.

Tom's going to have four of his own on at any given time. Right now he has five brewed (the dubbel is next in line).

Do you have any idea if EB + B will be doing growler fills?

Sean,
They are not going to be doing growler fills or take-out pizza for the first few weeks till they get a better idea on in-house demand. December? Maybe? But not this month, for sure.

We don't go dine-in there regularly since it is not close to our place. I make it a point to come every time I'm in the neighborhood. We get filled up and usually have leftovers to take home.