In Which I Keep All About Beer's Streak Alive 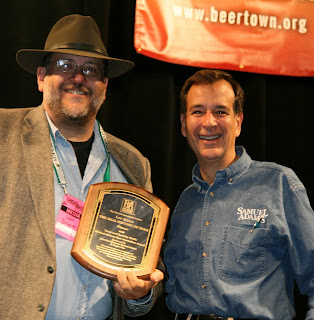 As this posts, I'm accepting the trade and specialized beer and brewing media award of the Michael Jackson Beer Journalism Awards at the GABF; my piece in All About Beer on "The Real History of Craft Beer" won. My apologies to all the folks I told I was not going to be at GABF: the BA asked me not to tell anyone about winning the award, so I didn't. At all.

And so this morning I left my hotel in San Francisco at 4:20, flew out of SFO at 6:20, and got into Denver about 10 AM to make it to the GABF on time to get the award. At least, I assume I did; I'm writing this in my room at the San Francisco Marriott Downtown on Friday afternoon before WhiskyFest.

My thanks to Rogue Ales, Boston Beer, and Brooklyn Brewery for the sponsorship of the award, to Daniel Bradford for the original idea of the story, and to Julie Bradford for suggesting that I submit the piece for the program. "We've got a streak going," she said, "and I just have a feeling about that piece." Other folks liked it too -- it's one of the few pieces I've done that I've gotten fan mail on -- so I sent it in.

So right now I'm collecting the award (that's a picture Tom Dalldorf took, and thanks to him and Celebrator for it), and tonight I'm going to spend some time at Falling Rock or Wynkoop with brewers and fellow writers. Good times, folks, good times. Thanks to everyone who's dug my writing; I do it for the most sincere beer geeky reasons: to share the love.

An update: I ran into Don Russell at the Fest afterwards, and we got to talking. Writers from Philadelphia have won one of these awards every year they've been awarded: Don, Carolyn Smagalski, Marnie Old, and now me. Sounds like we've got America's Best Beer-Writing City, too!
Posted by Lew Bryson at 15:19

Email ThisBlogThis!Share to TwitterShare to FacebookShare to Pinterest
Labels: beer writers, GABF, Lew Bryson, thanks to the readers, writing

As I said in my earlier "fanmail", its the best piece I've ever read in AAB.

That's awesome, Lew.Keep on doin' what your doin'!

Ron, seriously: your e-mail was what really made my mind up to submit that piece. Thanks!

Congrats you so and so!

Way to represent PA at the GABF! Our breweries didn't do too bad either!

Congratulations. You totally deserve it. Enjoy. You are the best.

Congratulations from a devoted reader.

BTW, the Van Dyck(sp) was sold this past week to the folks that own Pinhead Susans in Schenectady (if you want I'll hunt up the article in the Times Union for you). No word if they will be keeping it as a brewpub, only mention was of the upstairs music venue.

Bravo and much deserved!!!

Is the article available somewhere on the internet?

I'll ask All About Beer if they could put the piece up on their site.

Bill, thanks for the news; if you hear anything about whether they're going to keep the brewhouse, let me know?

Congrats Lew. Do you get one of those cool medals like the brewers do?

I got a plaque, which was a pain to carry around...but it's looking pretty cool on my office wall this morning.

FYI: Along with you, we also have 2 more winner-members over at RealBeer. 2 of our brewer-members each took a silver at the Festival.

Congrats on the award. How about a link to your column that won?

Congratulations! Your writing is terrific - keep it up!

Thanks again, everyone. And believe me, I fully intend to keep doing what I'm doing.

Well done from your fans across the pond ...

Congratulations, Lew! If you'd ever stop by NBI I'd buy you a beer!

They're charging for beer at the NBI now? What's this world coming to?