Great Day for a Parade 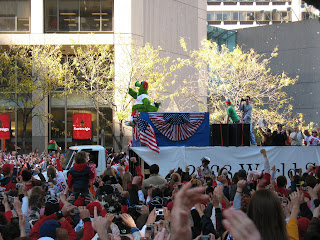 We meant to take public transit.

But it was monumentally overwhelmed. I was already at Rhawn and the Boulevard, doing platelet donation, so I just kept going in (parked on 7th, just south of Market); Cathy tried to get the kids to the Woodbourne station, but the parking lot was overflowing. She drove in with no problems -- thank you to all the suckers who stood on the SEPTA platforms watching train after train blow by full...to be fair, it sounds like no one expected the crowds they got for the parade, estimated this afternoon at 2.2 million people along the parade route and in the two arenas. That's some Phillies pride. (We even like our mascot.) 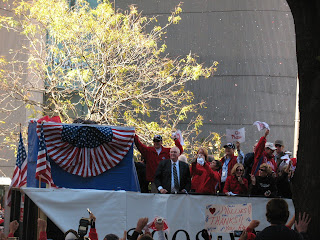 I walked down to The Foodery to score some cans of Sly Fox (open at 9:50, thanks!), some sodas for the kids, and a couple snacks, then couldn't resist stopping by McGillan's for a quick Penn Dark on my way up to City Hall. Met up with the family on the southwest corner, and that's where we stayed for two hours until the parade came. Lots of police, the Clydesdales (with Pat Burrell riding with the driver), the Phanatic, and then the team, with head coach Charlie Manuel -- in a pinstripe suit -- right there. We howled, we cheered, we clapped, and we grinned and told each other how great it was. As the truck made its way around City Hall to Broad Street, Mayor Nutter was holding up the trophy, and it was grand, just great. (Later in the afternoon it came to me that if this had happened last year, and Mayor Street had been holding the trophy, I'd have been incensed. Funny.)

And then we slowly made our way back through City Hall, got in the cars and went to Memphis Taproom for a late lunch. A very, very good day. Congratulations to the team, and thank you for bringing Philadelphia something so special: pride.
Posted by Lew Bryson at 22:28

I stayed where it was safe and watched the news coverage. The arial shots were unbelievable...it reminded me of Time Square during the new years celebration, but even more people. Broad St was just wall to wall people. Amazing, I never knew there were that many Philly fans out there.