You could just call it "Repeal" 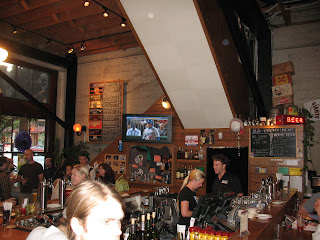 After we got back from Triple Rock, Cathy and I joined the Malt Advocate staff at 21st Amendment for dinner. The place is nothing grand, just a big, friendly space with a friendly staff. Shaun and Lloyd (brewer and GM) came out and said hi, but Shaun had to fly a new shipment of their canned IPA and Watermelon beer to GABF, and Lloyd had to get him to the airport. We got down to it, and grabbed a sampler and some apps (popcorn shrimp, calamari, some whoop-ass wings), and started tasting beers.

The vaunted Come Hell or High Watermelon Wheat was served with a wedge of watermelon, and it was quite aromatic of the melon indeed, tart in taste, but not overdone. I really liked the Bitter American, a 3.2%, 40 IBU beer that was all the best of American and English ale, and wound up grabbing two more pints of that. The IPA and double IPA were very well-done, but the hopping seemed very similar, the only difference being the maltier base of the double. The Oktoberfest was surprisingly on-target, malty and drinkable and great, really. The porter was pretty damned good, the Blonde...eh. There was also a pomegranate cider that was pretty tasty; not sure where that was from. I grabbed a Cuban sandwich, which was excellent, though the pickle should have been sweet and spicy, rather than half sour, as it seemed. 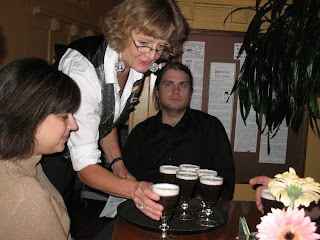 Where do you go from 21st Amendment? We went to the landmark Buena Vista Cafe for Irish coffee. Hey, we were tourists, why not do the touristy thing? And you know, the thing about Irish coffee, well, it's pretty damned good regardless. We all got down on our IC (except Heather, who doesn't really like coffee, so she had tea and brandy), and, well, I had two, they were so good. Yum.

When you're at Buena Vista, and you're staying on Market Street, the only thing to do is take the cable car back to the hotel. Man, did we ever. Take a look at Cathy's face and see how much we enjoyed it. Amy and I hung out on the step the whole way, saw it all. Touristy? Yeah. Fun? Betcherass! 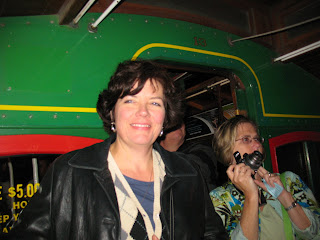 I believe the Pomegranate Cider was from Two Rivers. They are available at both 21st Amendment and Triple Rock actually. The owner was a guest on the Brewing Network a while ago.

Shaun-O is pretty cool, he is on the Brewing Network quite often. I'd love to try some beers from the 21A, specifically the IPA and Watermelon Wheat in cans. Can't seem to find them nearby.

Rich, actually when I said the owner I meant 2 Rivers Cider company.