Once again, I'm speaking at the World Beer Festival in Durham this weekend, and using the opportunity to scarf up some of the local bounty: North Carolina barbeque. I left my bro-in-law Carl's house yesterday morning about 9, and leisurely drove down I-85 and Rt. 1 to Raleigh, where I stopped on the outskirts of town at a plaza-based joint called the Barbecue Lodge. I was flying blind here, just going on the vaguest of recommendations, and it didn't look good: too damned bland, too damned clean. They were cleaning the glass on the pig showcases when I came in, even.

But the menu proudly declared that their minced pork barbecue sandwich was the best barbecue sandwich in the Carolinas, so I figured I'd give that a run -- besides, I had to save room for more, I was planning on hitting two more places. Oh, wait, banana pudding? I'll have that, too. Well, I got hush puppies (and the horrible "corn logs") right away; the sandwich and pudding came in about two minutes, along with a glass of sweet tea and a back-up pitcher on the side. Sweet!

The hush puppies were too delicate for my tastes -- I declined to even touch the corn logs. The sandwich, at $3.50, was stuffed with minced pork, moistly held together the classic vinegar/spice "sauce" they use round here, and the slaw was also finely minced, more like what we call "pepper cabbage" back home in Pennsylvania. I don't know about "best barbecue sandwich in the Carolinas," but it was damned fine. Still, it's just not a real smoky meat, which disappointed me. The banana pudding was rich and sweet, kept from tooth-hurtingly sweet by thick slices of mellow banana and big veins of cookie crumbs. I didn't finish it, but not because it wasn't toothsome. 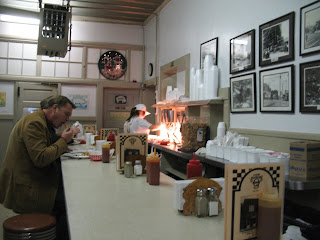 I paid up and headed into town towards Clyde Cooper's BBQ. Like the one reviewer on Yelp, I really wanted to like this place, and to be honest, I liked everything about it -- the old-timey space with the quick lunch counter service (on the right), the sweet tea, the hush puppies, the cracklin's (fried pork skins, like rich, crunchy fat), and some of the very best slaw I've ever had -- except the meat. I mean, damn. I got the coarse cut pork, and it just reminded me of the wet chunks of steam-roasted pork I used to get at the school cafeteria, dressed up with Carolina vinegar sauce. No smoke, and not much texture to speak of. I did eat things up, because the slaw was so damned good, and the tea was delish. But...it's a barbecue place. Sigh.

I walked over to the Flying Saucer because while I'd heard a lot about this beer-centric southern chain, I'd never been to one. Wow, beery as advertised. Tons of good beer in a wide-open, almost echoing space, a very long bar, and staff that really had a clue about the beer they were serving. The menu was accurate and up-to-date, I was offered a taster without asking for it, and the guy talked beer quite intelligently with two other customers. I got a Cottonwood Endo IPA that was real fresh, a blunt, hoppy smack in the chops. My God, North Carolina beer is so much better than it was 15 years ago. Which is true of damned near anywhere in the U.S., of course.

I meant to hit one more place, Ole Time Barbecue...but truth be told, I was gut-stuffed and groaning. I reluctantly headed to Durham, where I met up with All About Beer publisher Daniel Bradford, and went for a couple beers at one of his regular hangouts, Bull McCabe's. It's one of them "Irish" bars stuffed full of stuff from Ireland...but as DB said, just because it is doesn't mean it's not a fun place. And the Fuller's London Porter sure did rock.

It's Saturday morning now, though, and I'm getting ready to head out to Allen & Son for more great pork meat with Jay Brooks, who is also here to speak. We sat up drinking last night, and now it's barbecue time!
Posted by Lew Bryson at 09:09

Email ThisBlogThis!Share to TwitterShare to FacebookShare to Pinterest
Labels: barbeque, bars, The South

I know it's a little late, but next time you are down this way ask the beer geeks around here where the real que can be found. Of course everybody has their own opinion of what is good bbq, but I look at that like opinions on good beer (everybody is entitled to their own). Anyway for your next visit.. here is a long discussion thread we had about favorite bbq joints around NC..