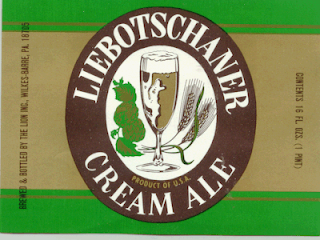 While I was away in San Francisco (and there's more WhiskyFest posting to come) and Denver (and thanks to all who've left such nice comments on the blog, and yes, more GABF posting to come), important things were happening in Pennsylvania. So important that they have to come first today:

Direct from last week's production meeting at The Lion, from master brewer Leo Orlandini: "We plan on bringing Lieb back in draft and in the bottle."

Credit where due: this is coming out of MyBeerBuzz.com, the NEPA "where's the beer" site where Liebotschaner Fever has picked up steam. People responded favorably to a "Do you want Liebotschaner back?" post, and Leo posted the above in response. Do brewers listen to you? You damn betcha.

A little fill-in I've picked up on this and other Lion projects: Lieb is not going to be back slap-dash: "We want to do it the right way," said my source at the brewery. Lionshead is getting the treatment, he gave as an example: new labels, new taphandles, and -- gasp! -- promotional trinkets. In fact, The Lion has actually hired a marketing firm. Don't panic: this is one of the few times you'll hear me say that this is a good thing (assuming the firm's any good, of course). The Lion's been making good beers -- Summer Stock, Holiday Warmer, Oktoberfest -- but they've fallen on barren ground because there wasn't any marketing/promotion/advertising to fertilize them. Now they might be able to thrive.

News on other brands: Steg 150 is not dead, despite rumors to the contrary, but there's "definitely going to be a name change." Just as well; "Steg 150" is a little too "Inside Baseball" for most folks. Big Hell yeah! to this one: "Our new owners aren't afraid to bring anything back, as long as it is done correctly...you'll probably see this one in the next 12 months." That's right, folks, he's talking about Summer Stock Lager. Yum.

Kinda cool to see this kind of excitement for old beers from an old regional brewery. Now...if Yuengling would just get on the stick and give us some of those "old recipes" they've been teasing us with for years, we could have some real fun!
Posted by Lew Bryson at 11:40

Email ThisBlogThis!Share to TwitterShare to FacebookShare to Pinterest
Labels: Liebotschaner, Pennsylvania, The Lion

As a Schuylkill County resident, I've been wondering if and when Yuengling might get on the craft beer bandwagon. It just makes sense to me... and with their marketing machine it couldn't be anything but good news for the industry. Hopefully they will see the success the Lion will have with this and follow suit!

Great news indeed on the Liebotschaner Cream Ale. It was a tasty example of the style -- and, it appears, again so. I gave a Smithsonian talk on American beer styles waaay back in 1995. The local wholesaler was out-of-stock that week. Leo paid for the rep's time and gas to drive up to the brewery and back to DC. She arrived just in time for the lecture.

"The Lion has actually hired a marketing firm." That is halarious!(in a good way) If somebody told me they were going market Liebotschaner I would of never believed it. Humble request to the good folks at Lion, please do not sacrifice The professor/Gibbons in order to resurrect Lieb. There is room for all your value brands

I hope this means more availability of Lion's beers in our area. We can certainly find them in the distributors, but this is really Yuengling country. I'd like to see Lion's beers more prominent out this way...then again, maybe I haven't been looking hard enough. I hope, at least, that as the roll out some of this "new" stuff that we can get it fairly easily. I'm kinda psyched to try this cream ale...sounds awesome.

Exciting to know that The Lion is poised to be a player in true craft beer! They have always done a good job with mainstream beers, and in recent years have moved closer to the craft market with excellent products like Brewery Hill Caramel Porter and Steg 150 (the best lager they've ever made, IMHO).

Barrel aging? God bless 'em, and I'll do whatever I can to make this effort a success!

P.S. Speaking of barrel aged, as you list successes from the GABF, how about Terry Hawbaker at the Bullfrog bringing home Williamsport's first-ever gold medal for barrel aged sour beer?!?

Cant wait to get the cream ale, though I am sorry to see changes to Steg 150. I liked it and now its gone.

Looks like the only change to Steg 150 will be the name; that's not so bad, eh? And if they start putting some money behind selling their beers, chances are you'll see more of it, too.

Perhaps the Lion is still making some Lieb?

Hey, while they're at it, why not return Stegmaier Porter to the old "licorice" recipe? In the early days of the US beer revival, that stuff was seen as decidedly "inauthentic" (altho' that was also before the recognition of the "Pennsylvania Porter" sub-style IIRC). But, these days, with so many "authentic porters" around I sorta miss it.

A friend's father was driver for Pabst in Newark and he used to have me buy the Steg Porter for him. It was still common in central NJ, with that weird "horse photo" label. Sold by the case in refillable bottles only at the time (tho' some retailers would sell it by the single bottle, too)- early 1970's- so I can't be sure if it was a Lion product or still Stegmaier at the time.

I'm hoping this stuff shows up too.

Knight's Head is evidently being heavily discounted. Given the thoroughly opaque marketing campaign behind it, I'm not surprised. If you like it, better buy it now, because a price like that is not going to keep them in business.

I haven't seen much of the marketing campaign, but the beer is decent enough.

Not great but good.

The Knight has made its last ride except for a few cases scattered across Phila and the counties..Lion beware what you wish for just ask the marketing team that were giving away those Knights..The marketing team who reped that brand in my humble opinion only caused some harm to the company,the Lion.The Knight is now going for somewhere around $100 dollors each but if you take a case of Knights head it will only cost you $90.00 dollors..

Ah, Mumbles, I was starting to think something had happened to you. Too bad. One problem with your whole incoherent ramble, though: The Lion was just the contract brewer on Knight's Head. Not their brand. Not their marketing. So sorry. Oh, and it's selling in Pittsburgh, too. Work on your details if you wanna be an oracle. Seen any gas prices lately?

Knights Head was strictly a contract for The Lion. The Lion had nothing to do with the marketing of this brand.

Things are certainly looking up - Liebotschaner coming back, Steg 150 staying around, and Winter Warmer in barrels. Best news though is the possible return of the Summer Stock Lager - probably my favorite Lion brew.

Yup, I think we're looking at the possible "Saranacization" of The Lion. Just remember: the success of Saranac at Matt's took almost ten years.

Agree with Jesskidden, if the lion wants to do another seasonal or a "old classic/retro" line, a GREAT place to start would be a "retro porter" (how many of THOSE are there?) and bring back a special edition of the old steg porter recipie from the 70's or 80's. That would really throw the beer geeks as there is a whole generation who has never had it and would be very interested.

And the encouragement has worked. Leo tells me Lion will be releasing sixtels of Steg Porter in their next production run (Dec).