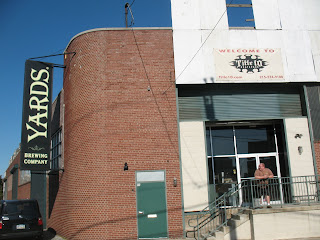 "When the farmers were coming in -- "

"The farmers, who were putting in the silo, from up in Lancaster," Tom Kehoe explained.

That's when I knew that despite the big new digs at 901 N. Delaware Ave., the big new brewhouse, and the sign out front (Yards! With a sign!), Tom Kehoe and Yards Brewing hadn't really changed all that much.

I went down to visit Tom (and Steve Mashington and Tim Roberts) at Yards for the first time last week (and I'd have posted this sooner, but I misplaced my notes). The first brew was on August 29, two months ago, and beer is getting out into the Five County area already; draft-only, but bottling was supposed to have started this past weekend. They were doing final testing on the bottling line while I was there.

Basics: Year-rounds will be ESA, Philly Pale, IPA, and Brawler. Remember Brawler, the "pugilist-style ale"? It's a 4.0% malt-forward session beer, "A ruby mild, really," Tom said. I'm eager to see if a session beer can hold its own in wider distribution, of course. Seasonals, for now, are Love Stout in the fall and winter, Saison in the spring and summer. (Tom gleefully told me that Love Stout made an unannounced appearance in Kevin Smith's new film, Zack and Miri Make a Porno; can you think of a more appropriate beer?) Will the oysters return to Love Stout? "We're asking the ATTTB about the oysters," said Tom. Oh, and the real reason they're in there? Just because. 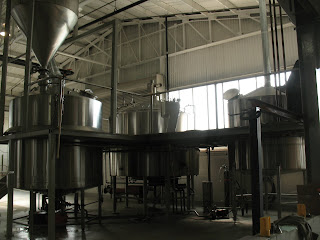 There will also be some one-offs coming from the old original Yards brewing system, the little three-barrel baby from the old brewery up on the hill in Manayunk. "We can do all kinds of fun stuff with it, we just need to get it bricked up," said Tom.

But don't think this is a precious "do it for the love" brewery. Kehoe intends to put a serious amount of beer out the door. With the tanks that are coming in the next couple weeks (and the fourth vessel of the brewhouse), the capacity of the brewery will be "more than twice what we had before." He doesn't expect to hit that right away, of course -- and there's evidently some interest in contract-brewing to take up some of that -- but "There's been a buzz about Yards [outside of Philadelphia]. People want our beer. Our spigots are down, sure, but people are willing to jump right back in. They were turned off by the perception of the Lion's quality."

Distribution will be through Clement Muller this time, not self-distribution. "We're not planning to go farther than we were before," Tom said. "Muller's bring us the four counties [Bucks, Montgomery, Delaware, and Chester], and we're probably looking at New York City. Why not, everyone else is." 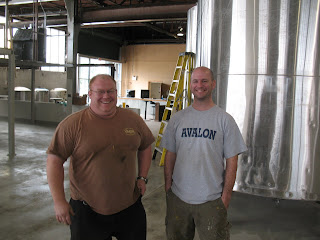 Meanwhile, Kehoe and Mashington are doing cask nights at area bars. "It's a totally different market," Kehoe told me. "Bars love to put a cask on the bar." It's not just the usual suspects, either: "Philadelphia Fish Company is doing cask on the bar. If we had the casks, we could be doing five times the events we're doing."

(The picture here is of Kehoe and his production brewer, Tim Roberts, who kept the Independence brewpub in fine beers for years before it finally went down. Frank Winslow is the QA brewer, running the fancy, well-equipped lab at the brewery.)

When the split came between Yards and Philadelphia Brewing -- or, better put, between Kehoe and former partner Bill Barton -- they divvied up the casks between them. Kehoe is getting some new firkins in. Don't expect to see a lot more cask Yards, though. "No one's cellaring," Kehoe complained. "It's too hard for people to deal with. (insert blogger's disgusted pause for the condition of bar owners these days) And when we do events, we get the cask right back at the end of the night, which is so much better."

So, about that split. I didn't really ask much, and I don't intend to ask the Bartons much when I sit down with them -- soon, I hope -- to talk about Philadelphia Brewing. It doesn't have much to do with the beer, way I see it.

About the beer...I sat down with Tom with glasses of one of the first batches of Philly Pale. "Don't judge by this one," he said, "we were still getting the brewhouse dialed in, and the next batch is much better already." It was still nice to be sitting in Philly, drinking Philly-brewed Philly Pale.

About where we were sitting. 901 N. Delaware Ave is right down the block from the proposed site of the controversial Sugarhouse casino; in fact, we stood out back and watched the heavy machines levelling the site. (It's also not far at all from Memphis Taproom...as I found out, thanks to my girlfriend.) So what's planned for the brewery visitor?

Despite rumors and hopes of food by City Tavern's Walter Staib (and that would be grand), Tom said clearly that it's about the beer. "We're going to do a tasting room," he said, "but we want people to be able to buy a full beer, or a case of beer. My idea is an English beer garden, but we're focused on the beer. The beer experience is the tour."

He laughed. "Of course, with all the Sugarhouse stuff, who knows?!"

Then we walked outside, and looked up at that big, beautiful Yards sign. "We never had a location that advertised itself before," Tom said. "The location and the sign are going to let more people know about Yards."

As I drove off into the gorgeous October afternoon, I remember talking with folks ten years ago about why places like Red Bell, Poor Henry's, and Independence always got all the money and all the attention, while all Yards got was critical acclaim -- and critical criticism when it would go through an occasional off-period -- and beer geek love...but not much in the way of sales. Tom Kehoe's ready to roll the dice and grow the brand. After years of suburban domination, we may get a big production brewery in Philly yet.

And of course, it might turn out to be Philadelphia Brewing. I'll be visiting there next.
Posted by Lew Bryson at 15:53

So who exactly is this "Mashington", and in what capacity does he serve Yards? Sounds like a guy with his finger on the pulse of the industry, no doubt about it.

Mashington? A weenie roast, as my friend Scot used to say. An also-ran. But...one of the up-and-coming dudes in Philly brewing. Wow. An enigma, a contradiction in one body. Indeed: who exactly IS this "Mashington?"

Lancaster...what about distributing in Lancaster county!

Could take a while, Rich...when the hell are you going to get some beer bars in Lancaster County?

This Mashington character sounds like some sort of ninja.

Great wholesaler you have for the beer, rumor had it was in the running for small craft wholesaler of the year at great american beer fest.Good luck and its great knowing your fine beers are making the rounds...