Cathy and I caught a morning flight to San Francisco yesterday, but not before being accosted by two hooligans in the terminal: Don "Joe Sixpack" Russell and Origlio craft/import genius Jim Meiers. They were on their way to Denver for GABF. After a few laughs over Sara Palin's "Joe Sixpack" remarks and how every damned news outlet in the country's been calling Don for an official statement, we headed to our respective flights (funny: Don's actually going to SF from Denver for Sunday's Eagles game...by which time we'll be back in Philly).

After a long flight, we touched down about fifteen minutes late (thanks to some schmuck who insisted on getting up out of his seat while we were taxiing on takeoff), took forever to get our luggage, and then took BART into town, which delivered us half a block from our room at the Marriott Downtown. By the time we were checked in, and had refreshed, it was 3 o'clock, and we had reservations for our traditional "night before the Fest" staff dinner at 21st Amendment. Clearly, we'd have to hustle to squeeze in some other beertime. 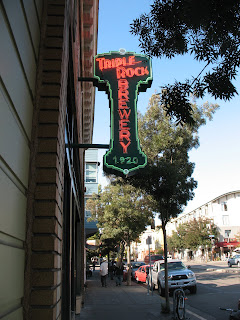 Hustle we did: we got back on BART, just timing the train, and went across the Bay to the Downtown Berkeley stop, which is just about two blocks from the beautiful sight you see here: Triple Rock Brewery. I really wanted to get here last year, but it just didn't work out. This year it was by God gonna work out, and it was worth it.

The last time I'd been to Triple Rock was in January, 1988, when I was living in Salinas. I loved the place, the vibe, the juke, the beer! And here I was, back again, with the girl I started dating only six months after that first visit; we even sat in the same seats that my friend Bobby Gryce and I had sat in back in '88. That may sound like a set-up for dashed expectations, but I'm happy to report that Triple Rock lived up to every one of them. The service was quick, smart, and sassy (thanks, Jesse...er, at least, that's what you said your name was to those two road-tripping girls), the grilled veg quesadilla was hot and gooey-delish, and the beer rocked.

On Jesse's recommendation, we had the Harvest Ale (a fresh hop wonder that just reeked of resin, huge hop nose) and a great big stout their last brewer had hammered together as his last brew (very rich, restrained bitterness, chocolate notes, and way too drinkable for the advertised 11% ABV). We got stuck into those pretty quick -- first beer of the day! -- and got another round: Titanium Pale Ale (wickedly drinkable at 7.4, living up to its brilliant "Light but strong!" motto, and really refreshing, too, not whackedly hopped up) and Dragon's Milk (a dry-hopped brown ale that was almost like a dark IPA, quite an assertive beer). I kind of tore into the jalapenos on the quesadilla and needed one more: I wanted to get the Black Rock Porter I'd had 20 years ago, but it was out, so I got another Harvest Ale. 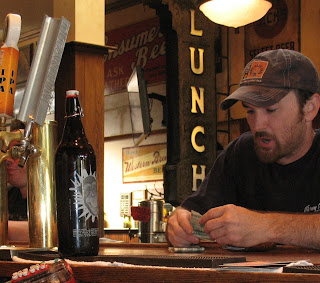 What we didn't get -- and I'm regretting it already -- was a bottle of Monkey Head Arboreal Ale, one of which you see in the pic. They only serve it on Thursdays, and you have to drink it there. I wanted to, but it's 9%, and by the time we got the idea, we only had about 20 minutes left before we had to leave. Maybe next time, because the idea of a beer that's only served on Thursdays intrigued me. Meantime, we got into a very nice conversation with a woman who came in and grabbed the stool next to Cathy, who turned out to be a cancer researcher, and they were talking shop a mile a minute. Me, I just relaxed and drank in the vibe. Triple Rock was just how I remembered it, and that's a wonderful thing.

We hustled down to the BART station and once again timed the train on the button -- dumb luck, or as Cathy called it, "the Brother System," explaining that her brothers never planned anything and things just always fell into place. Hell of a system! We got back in time to meet everyone at the hotel, and Amy whistled up a limo (I swear, the woman's addicted to limos) to take us to 21st Amendment...which is going to have to wait for another post, because it's time to walk and grab breakfast before doing set-up for the festival.
Posted by Lew Bryson at 09:00

>They only serve in on Mondays, and you have to drink it there. I wanted to, but it's 9%, and by the time we got the idea, we only had about 20 minutes left before we had to leave. Maybe next time, because the idea of a beer that's only served on Thursdays intrigued me.<

Are you sure you didn't have a bottle? Maybe two?

HA! Must have been all the beers at 21st Amendment. Thanks for the catch, Jack; that's what I get for posting in the dark before having any coffee.

Shame on you, Lew. It's our responsibility as beer journalists to order that elusive beer no matter what, even if - gasp! - we must contribute the excess to the palate and stomach of another worthy soul at the bar.

Steve, I can tell you: I do NOT intend to let another 20 years go by before visiting again!

Stephen, well...you got me. That never even occurred to me, and it should have. It would have been The Right Thing To Do. I'll take your example in the future, thanks for the guidance.

>Thanks for the catch, Jack; that's what I get for posting in the dark before having any coffee.<

You post in the dark? That explains a lot.

Yea, IMO Triple Rock is definitely the best of the bars in downtown Berkeley. On a Thursday night, you were probably about the only person *not* drinking Monkey Head.

Also, You can get a bottle of Monkey Head to go, any day of the week. It's just you have to get a three liter bottle that's $27 + a $20 deposit. (Unless this has changed recently.) I've definitely seen it at Ledger's Liquor as well, with a $3 markup.

I'll put Pac Coast on the list for next time. Thanks!