Iron Hill cask event: I'm getting me some of that! 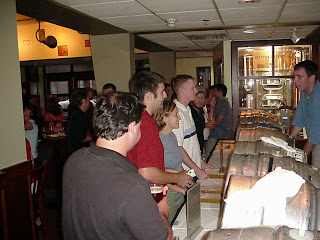 Got a release on the next Iron Hill Brewers' Reserve event: a 'roll your own' Black and Tan* cask ale event at their Newark brewpub on November 15, starting at noon. Iron Hill brewers will supply "cask conditioned dark and pale ales", as will brewers from Stewart’s, Nodding Head, Yards, General Lafayette Inn, Sly Fox, Triumph, and Earth Bread + Brewery (I assume I don't have to tell you that these are some of our best cask brewers in the area, right?). Customers will, says the release, "be encouraged to create their own “Black and Tan” combinations." Beers will be sold by the pint till it all runs out. I missed the SPBW Real Ale event a few weeks ago, I'll be damned if I'm gonna miss this one! See you there.

*Before the inevitable "Black and Tan is offensive to the Irish!" comments come rolling in (and I won't allow them to post, so don't waste your time and mine)... The Royal Irish Constabulary Reserve Force, the British paramilitary group that quickly gained a reputation for brutality in the early 1920s in Ireland, became known as the "Black & Tans" because of their uniform colors, true enough. But "black and tan" as the name for a mix of a dark and lighter beer actually pre-dates that, going back into the 1800s. So stop being all Irish-American (like me and my wife are) and in my face with it, and relax, and enjoy this delicious mixture for what it is: beer.
Posted by Lew Bryson at 15:25

See you there. On another note, Horwitz and I have a request for you involving whiskey, Kentucky and an RV. We'll discuss in Newark.